Summary:
One of the simplest low carb side dishes, these brussels sprouts are cooked with bacon, apple cider vinegar, and soy sauce in the Instant Pot. 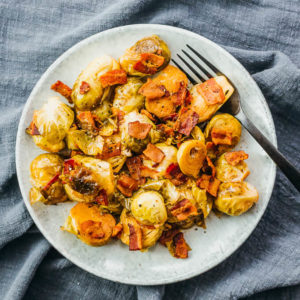 It only takes a couple of minutes to pressure cook brussels sprouts until they come out nicely tender. I pair them with chopped bacon because I can never resist the brussels sprouts + bacon combination — see Exhibit A: Bacon Wrapped Brussels Sprouts or Exhibit B: Pan Fried Brussels Sprouts with Bacon. When Thanksgiving finally rolls around again, I’ll definitely be making them in the Instant Pot as a quick and easy side dish.

I recommend 4 minutes as a good rule of thumb for anyone making them in the pressure cooker for the first time. This time estimate is assuming that you’re using a manual quick release and not natural release.

I think the short pressure cooking time makes this recipe easier than conventional methods, like baking brussels sprouts in the oven or pan frying them on the stovetop, which is what I find to be true for most Instant Pot recipes.

Some quick tips on making this recipe:

Can this be made from frozen Brussel sprouts?

I love the bacon and sprouts a little crispy. Would you shorten the cooking time and put it under the broiler for a bit to crisp it up?

Hi Sarita, I wouldn’t change the cooking time but the broiler is a good idea for giving them a nice crisp after pressure cooking.

Love this recipe! I doubled the recipe and cooked for 4 min and it turned out perfectly! This goes great with my low carb, low sugar eating plan. Can’t wait to try more of your recipes!

Just made this – delicious! I have a six quart and want to double the recipe. Should I also double cooking time?

Glad you enjoyed it! The pressure cooking time remains the same, even if you double the ingredients.

I grew brussels sprouts in my garden but a lot of them are really small, will they over cook or should I keep them whole instead of halve them?

If they are really small, I recommend leaving them whole.

I’m brand new to instant pot cooking, and I just received an 8 qt. pot. If I don’t double the recipe will there be a problem cooking it in the larger pot? Do I need to reduce the cooking time? Can’t wait to try it!

8 quart should be fine. The only potential problem is getting the larger pot to pressurize. If the pot has trouble pressurizing, or takes a really long time, you can add a few tablespoons of water to the pot along with the other ingredients.

I have no made this, but was wondering – if I double the recipe, do I add time for the pressure cooking?

The pressure cooking time would remain the same.

This looks wonderful! I have a pack of burssels sprouts and some turkey bacon in the fridge, so guess who’s making this soon! 😉 One question though, why so much liquid? Liquids don’t seem to reduce very much in the IP, and wouldn’t the brussels sprouts be crispier without so much of the soy sauce+acv? Thanks!

Hi Fran! The liquid serves 2 purposes. One, to provide liquid for pressurizing the pot. Two, so that the brussels sprouts can more easily soak up the flavor while pressure cooking. At the end of the recipe, you can either serve with the extra liquid or you can use a slotted spoon (see step 3) to take out the brussels sprouts so that the extra liquid stays in the pot. Note that nothing ever gets crispy in the Instant Pot — it just doesn’t happen with pressure cooking, which tends to make things tender and moist.

This is absolutely delicious … my husband (not really a brussels sprouts fan) even went back for more!!

Haha that’s awesome!! Once brussels sprouts are back in season, I’ll definitely be making this a lot more 🙂

I love balsamic vinegar on my sprouts.

My first Instant Pot meal. Should be don’t in a couple of minutes… Already rating it a Five based on ease of prep.

Newsletter
Subscribe and get the latest low carb recipes by email?
Vote Up0Vote Down  Reply
Emma

Really easy recipe to follow. Your picture looked so good, I had to try it. Mine turned out to salty. I will make it again, but use less low sodium soy sauce and no salt. I did follow the suggestion of another comment and added a vidalia onion, which I cut into six wedges. Thanks for the recipe.

Hi Emma, thanks for your feedback! It’s definitely possible that I like my foods on the saltier side 🙂 Depending on the type of sea salt you use (finely or coarsely grated), the same 1/2 teaspoon volume of sea salt could be too salty or not salty enough. Personally, I use coarsely ground sea salt.

I would reduce or remove the salt. Whole family loved it. Suggest add a small amount of onion. I would also consider this same recipe for asparagus

Wow, this was so easy to make!!