Summary:
These keto almond flour biscuits with bacon and cheddar cheese are easy-to-make savory treats, one of the most popular low carb imitations on the site. Enjoy them for breakfast, lunch, as an appetizer, or as a snack. 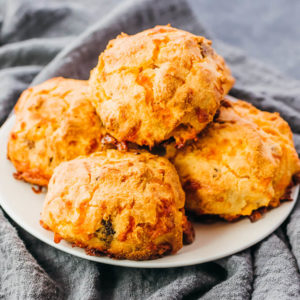 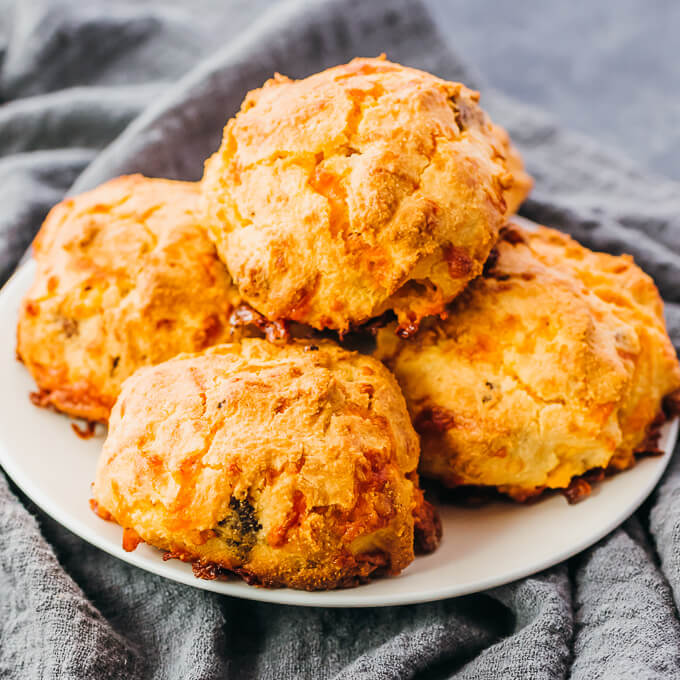 These low carb biscuits are made using almond flour, plenty of cheddar cheese, crispy bacon crumbles, eggs, cream, and butter. Just combine all of the ingredients together into a mixing bowl and divide into eight mounds on a baking tray. Bake for about 25 minutes, and you’ll end up with delicious cheddar bacon biscuits. No special equipment or ingredients are needed for this easy bake job.

Each keto biscuit is 2.5g net carbs and 350 calories (but feels like a lot more!). They’re very hearty and filling, keeping you satiated for a while. They taste and look like carby comfort food. 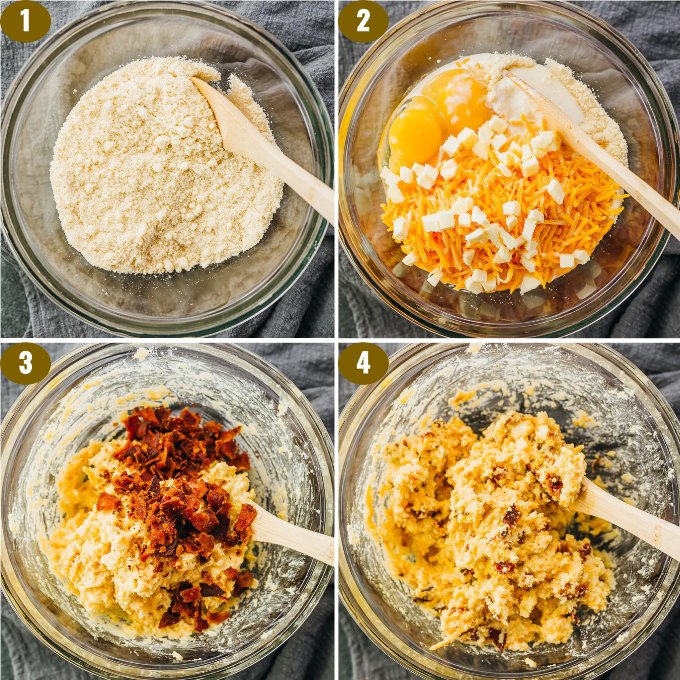 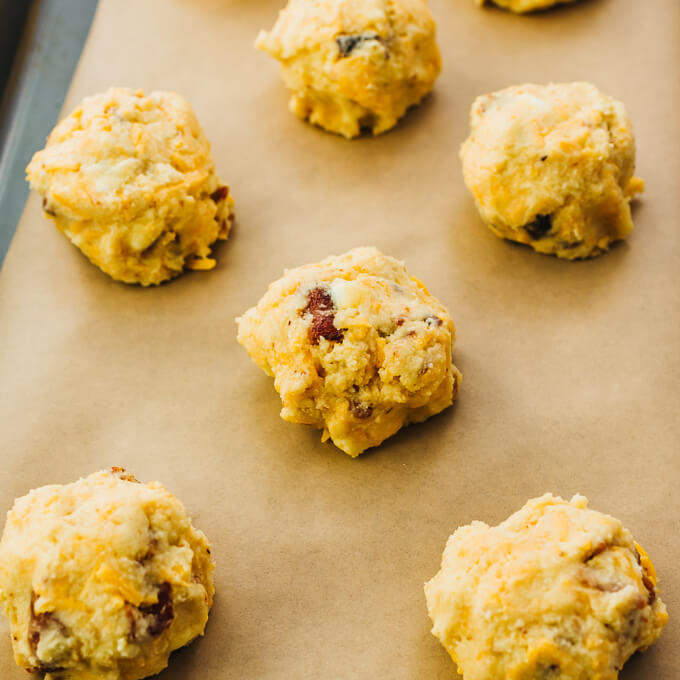 I’m often asked about almond flour brands. I usually use Trader Joe’s and Costco’s Kirkland brand for almond flour in this recipe, and both of them have worked equally well.

I also recommend checking the nutrition facts of your almond flour, which should be 2g net carbs per 1/4 cup (1 ounce) serving.

Please don’t substitute almond flour with coconut flour, which is much more absorbent and isn’t a 1:1 substitution. 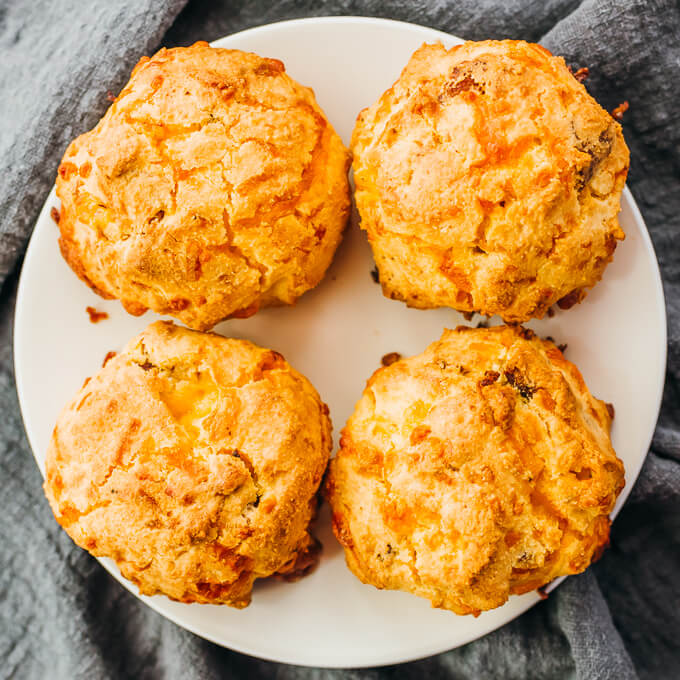 If this is your first time making these almond flour biscuits, I suggest you follow the recipe as closely as possible to see how they’re intended to turn out. Then if you decide to make them again, you can try some of these alternate flavors and other creative ideas shared by readers:

This is a relatively forgiving recipe as far as baked goods go, so feel free to try different things and let me know how it went in the comments section below. 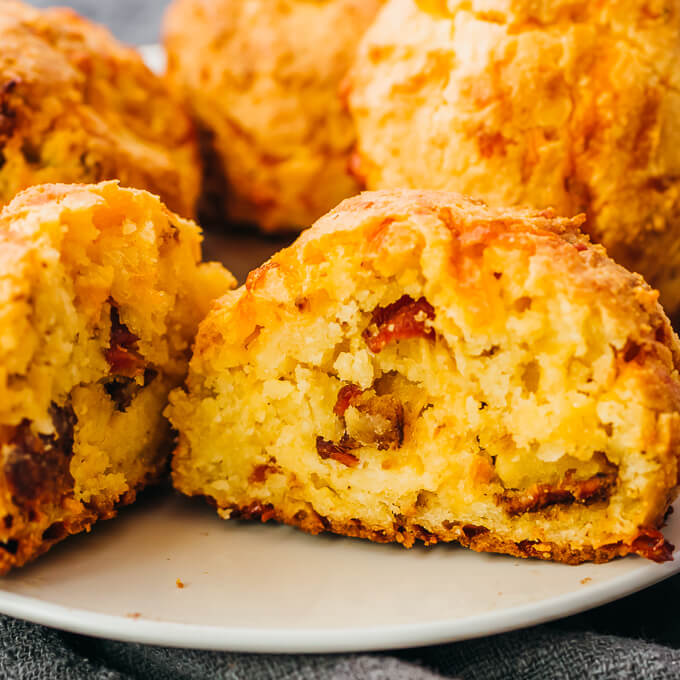 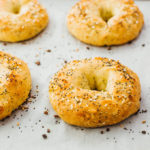 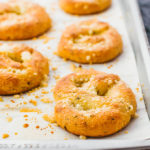 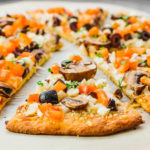 I like this recipe. I separate the eggs and whips the whites to make a lighter version, closer to a muffin.
I’ve also baked it in loaf format to slice and toast.

Vote Up2Vote Down  Reply
In

I made it but added 1 tsp baking powder. Also added jalapeños.

My son thinks they taste more like cookie than biscuits, so I made cookies out of them. First try I added 1 teaspoon of cinnamon and 1/2 cup of Apriva sweetener and cut out the bacon. He loved them. I made 12, flattened them a little and cut cooking time to 25 min on my oven down 5 minutes.
Second “cookie“ recipe, I skipped butter and bacon and added The 1/2 cup sweetener and 1/4 cup peanut butter. I think I could have used 1/2. I made 16 cookies complete with fork lines. Didn’t last a day.
Thank you for this recipe.

Newsletter
Subscribe and get the latest low carb recipes by email?
Vote Up1Vote Down  Reply
June

Did you skip the cheese as well?

I think I commented in the wrong spot the first time but can I substitute full fat coconut milk for heavy cream?

I’ve made these biscuits several times now. I love the flavor. I do add a teaspoon of baking powder. No need for butter when they’re done, they melt in your mouth! Thanks for a fantastic, keto-friendly recipe!

Does the baking powder help them rise more?

These are very good and easy to make. Next time I will try some variations.

If I would try the vanilla, sweetener and pecans….what about the 1tsp salt? Omit? Reduce?
I’ve done the Savory with bacon, farmer sausage, darkly ground beef…all have been Excellent!

For the sweet version, I would still include a pinch of salt, enough to enhance the other flavors but not enough for the biscuits to actually taste salty. Here are two options: (1) Omit the 1 tsp salt entirely, and use SALTED butter instead of unsalted, or (2) use a pinch (1/8 tsp or less) of salt, and use UNSALTED butter. Either option should work well.

If you give this a try, please let me know how it goes. I love hearing about different flavor variations that readers try.

Are these really 350 cals per biscuit? Seems like too much but cant wait to try them.

Yes, they really are. Ingredients like heavy whipping cream, cheese, and almond flour are very calorie-dense. Typically, foods with high fat content (as opposed to protein or carbs) are very caloric. Personally, I like how the biscuits are very filling because it means that I don’t need to prepare other foods to keep me full until the next meal. For a less caloric biscuit, you can have only a half biscuit at a time.

Also, keep in mind that all nutrition information is an estimate. You’d be surprised to see how much the same food can vary from brand to brand. I estimate my nutrition based on the actual products that I use, so depending on what you’re using, your biscuits can vary in their caloric content.

That’s not a bad thing, these are a special treat here and also expensive. A little goes a long way and all those lovely fats help you feel satiated, longer. I don’t mind “spending” calories here 🙂

Just made for a brunch meeting I’m attending in about two hours. Tested of one and oh my gosh these are delicious

Newsletter
Subscribe and get the latest low carb recipes by email?
Vote Up0Vote Down  Reply
Wanda

I used a muffin tin to make this recipe, came out fantastic. Very tasty, thank you

Hello – we make these biscuits often with different kinds of cheeses (usually without the bacon) and love them. Can you let me know if you recommend also freezing them and any suggestions for defrosting/reheating? We are traveling and want to take some with us. Any advice would be much appreciated. Thank you!

I haven’t tried freezing these biscuits so I’m not sure how they would turn out. If you’d like to give it a try: after shaping the biscuits and placing them on a baking tray, transfer the tray to the freezer and freeze until the biscuits are solid. Then place all of the biscuits in a zip-top bag in the freezer. When you’re ready to bake, just pop them into the oven as it’s pre-heating to thaw them. Might need to add a few minutes to the bake time. Hope that’s helpful!

I cook these in a muffin tin. I also add baking powder to make it lighter and closer to a muffin

How much baking powder Sam?

great recipes……wish the measurements etc were also in metric and oven temps in centigrade!

Newsletter
Subscribe and get the latest low carb recipes by email?
Vote Up0Vote Down  Reply
Tracy

First ever Keto recipe!! I’m wondering if these will freeze?

These are really, really good! I mean I used bobs redmill flour and I don’t see how there could be more carbs in this brand than in others? I mean almonds are almonds I thought? But at any rate they’re great! One fills you up and the taste is just like a biscuit. I’ll make em again.

That’s what I thought too, but I have seen a discrepancy on Bob’s Red Mill almond flour and I have no idea if it’s actually the case or a misprint of their nutrition label. Glad you enjoyed these biscuits!

Yes, I agree perhaps there was a discrepancy. But at any rate they are great and next time I’ll try TJ almond flour.

Wow they turned out so tasty!!!

Newsletter
Subscribe and get the latest low carb recipes by email?
Vote Up0Vote Down  Reply
Danya

These are a family favorite! I brush melted garlic butter on them as soon as I take them out of the oven…tastes just like Red Lobster biscuits ❤️ Thank you for sharing this recipe!

Holy cow! These were so savory. I did add some flavored butter because I had it on hand. My boyfriend wants a second batch pronto. Thanks for the recipe!

I just made these today. OMG are they delicious! I felt like I had to be cheating. I used a combo of cheddar and asiago cheese. Great combo. I also put in a extra slice of bacon since it would have left just one slice in the packaged and that just didn’t seem right lol. I see myself making these often!

Great recipe! My tweaks: I add 1 teaspoon baking powder and the salt to the almond flour, then use a pastry cutter to cut the butter into the flour/salt/baking soda mixture until it resembles sand/the butter bits are smaller than pea sized. Then add cheese and wet ingredients. I find the biscuits bake up fluffier.

Just made these tonight! Sooooo good! I didn’t have bacon but next time I will pick some up. My husband has to eat very low carb and these were perfect. He won’t stop raving about them. Thank you for the amazing recipe!

Newsletter
Subscribe and get the latest low carb recipes by email?
Vote Up0Vote Down  Reply
Michele

These biscuits were delicious! I was so pleasantly surprised and grateful. Thank-you!