I love these homemade pan-fried Chinese dumplings, filled with ground beef and sliced scallions. Also known as potstickers, they’re fun to assemble, can be made ahead of time, and easy to cook. 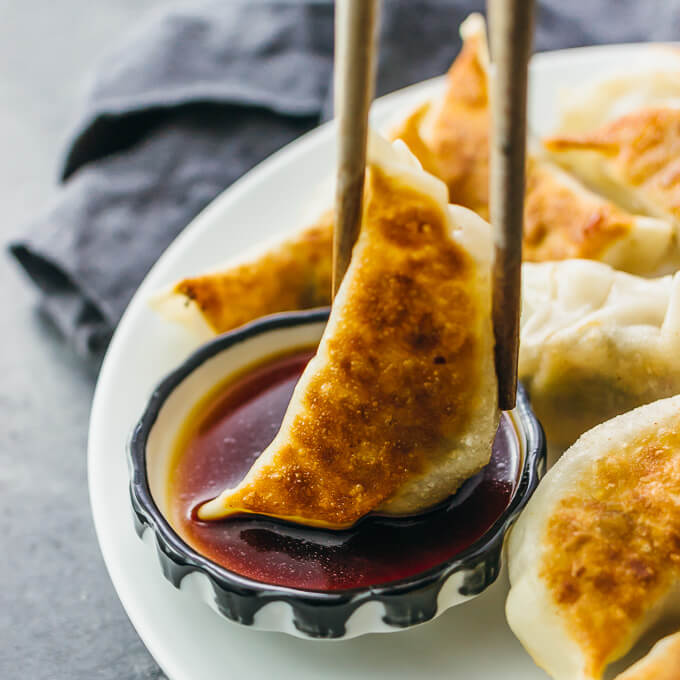 This pan-fried Chinese dumplings recipe is another family favorite handed down from my mom, in addition to her Mexican salsa, Kung Pao chicken, and classic cheesecake recipes. My mom has been making dumplings for decades, often making hundreds at a time, and I’ve been helping her for as long as I can remember.

Dumplings can have a wide variety of fillings; most commonly, they are filled with ground pork with cabbage, chicken with onions, beef with scallions, or shrimp with celery. One of my favorites is the classic beef dumpling, which has a simple filling with ground beef, scallions, fresh ginger, and sesame oil. 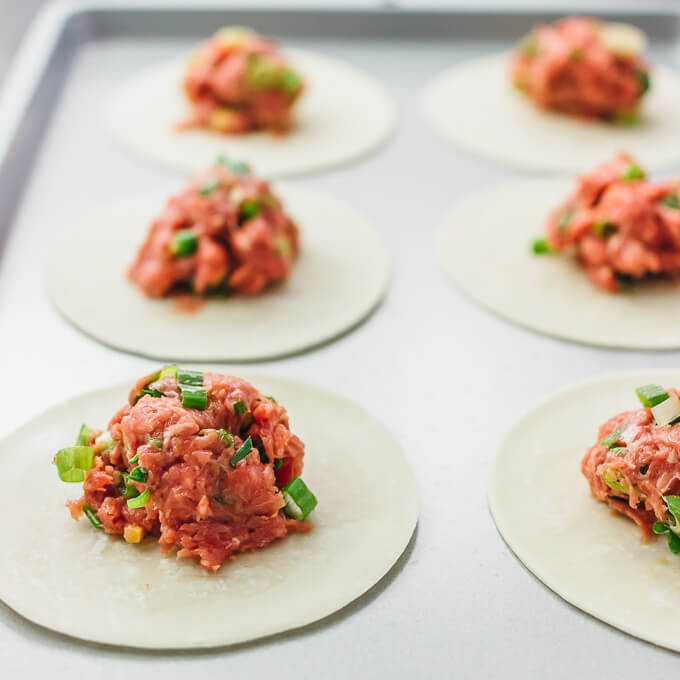 Freshly made dumplings keep well for months in the freezer, which is why it’s easy to whip up a big batch of homemade Chinese dumplings to freeze until ready to cook. Once frozen, they can be quickly cooked by either boiling or pan-frying, which makes them perfect for dinner in a pinch.

If boiling, the dumplings should be added to boiling water and they are done when they float to the surface. If pan-frying, you can follow the recipe instructions below but expect a longer cooking time. I find cooking frozen dumplings to be easier than cooking fresh ones, because frozen dumplings are easier to handle and don’t stick as readily to pans. 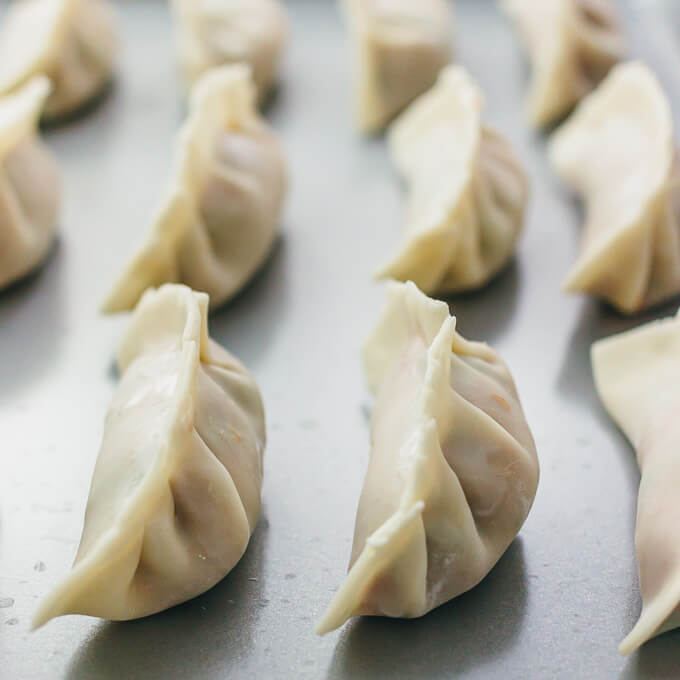 Chinese dumpling wrappers are different from egg roll wrappers or wonton wrappers, which are both square shaped.  Dumpling wrappers are round and fit into the palm of your hand. You can find them in the refrigerated sections of major supermarkets as well as Asian specialty grocers like H-Mart. Alternately, you can also try making your own dumpling dough. 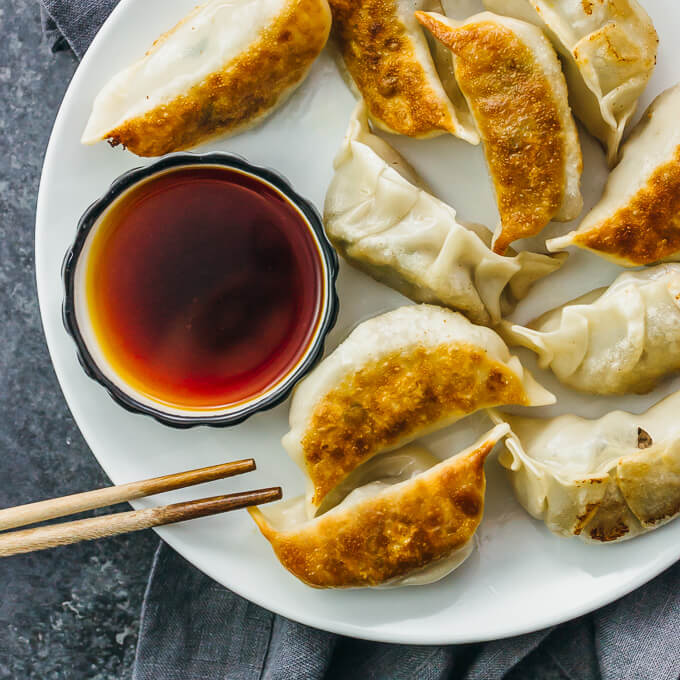 Here are a few tips on wrapping dumplings: 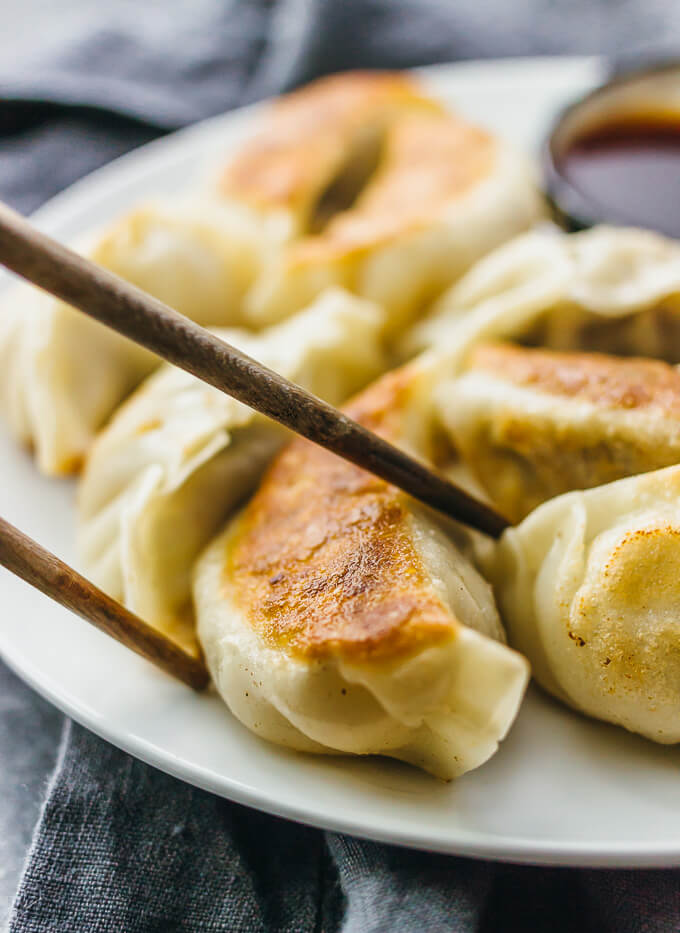 For the dipping sauce, I prefer soy sauce mixed with some rice vinegar and a dash of sesame oil. You can make it a little spicy by adding some sriracha  — the options are endless.

Looking for the best keto recipes? 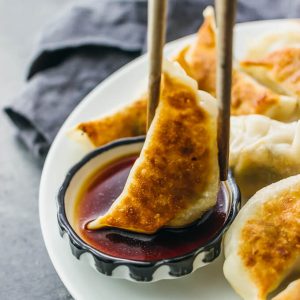 Homemade pan-fried Chinese dumplings filled with ground beef and sliced scallions. Also known as potstickers, they're fun to assemble, can be made ahead of time, and easy to cook.

For filling and wrapping: 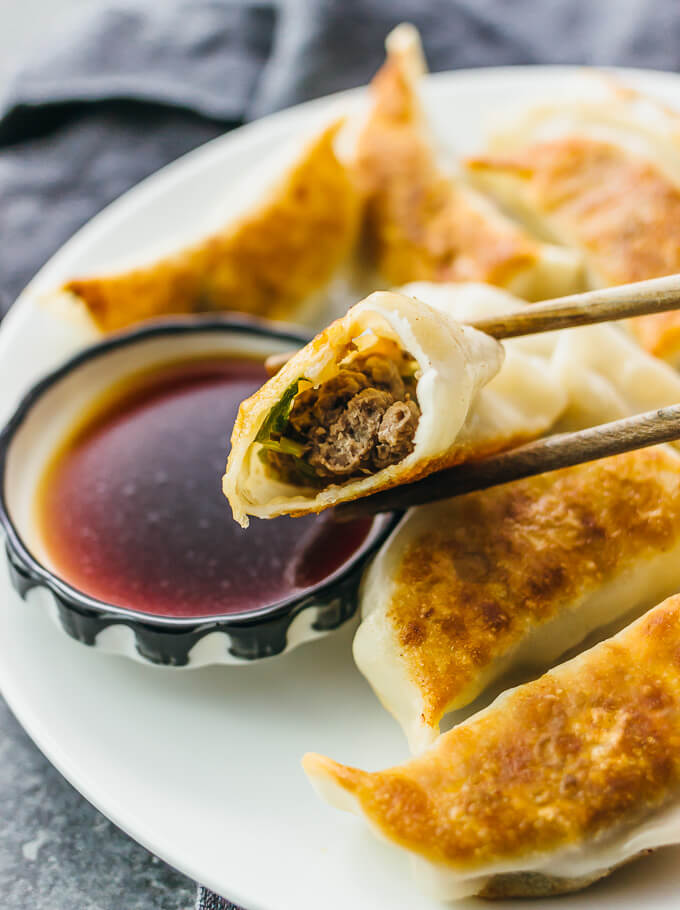 Awesome recipe! SO excited to finally make my own dumplings!

These look incredible! I’m making an Asian dinner for friends soon and these would be perfect.

Is there maybe a low carb version of this?

What would you suggest for a chicken or veggie filling?

For a chicken filling, just replace the ground beef with ground chicken. For a veggie filling, I recommend replacing with shredded cabbage and carrots.

Hii..Can i use wonton wrappers to make dumpling?

Unfortunately no, wonton wrappers are different and won’t work here. You’ll need to use wrappers specifically for dumplings, which you can find at Asian specific stores like Hmart.

Every time I make dumplings, I always use wonton wrappers. In my experience, they work great. I’ve used them to make these exact dumplings (just ground pork instead of beef) for my husband about 3 times in the past few months.

I agree I also used wonton wrappers because that’s all I had and they worked just as well. Just the shape was different and I trimmed the corners a bit and used pork.

This was a fun recipe! How do I keep my filling from being so greasy? Once they were cooked it was super greasy from my meat mixture.

Thanks! You can decrease the sesame oil and/or use a leaner ground beef.

Is there a good wrap recipe?

Hi Chuck, I don’t have a wrap recipe. I usually just buy them at a local Asian grocery store. Making your own wraps is a lot of work!

Question: The round wrappers . . . are they rice papers wrappers. That’s the only kind I can find.

Unfortunately no, they are not rice paper wrappers — those will not work here. You’ll need ones that say dumpling wrappers on them. You can find them at Asian stores like Hmart.

So does the 2 tablespoons of canola oil and 2 tablespoons of water last for all 30 dumplings. I don’t have a pan big enough to cook all of them at once. Would I cook in batches and add more oil and water for each batch? They look yummy!

Hi Vicki! I would still use 2 tablespoons canola oil and 2 tablespoons water even if you cook them in batches. After the first batch, add more oil if the pan gets dry.

Hello! If I make them ahead of time, Do I just let them sit in the refrigerator with a wet paper towel over them? Or freeze them? Then, if frozen, do I let them thaw first and cook following the directions listed?

I suggest freezing them. Once frozen, you do not need to thaw first. Just follow the directions in the recipe and expect to cook for longer since they are frozen.

Your folding is SO pretty… definitely a skill that takes some time to get and you have mastered it!