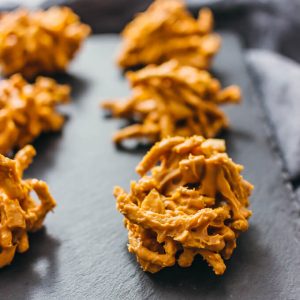 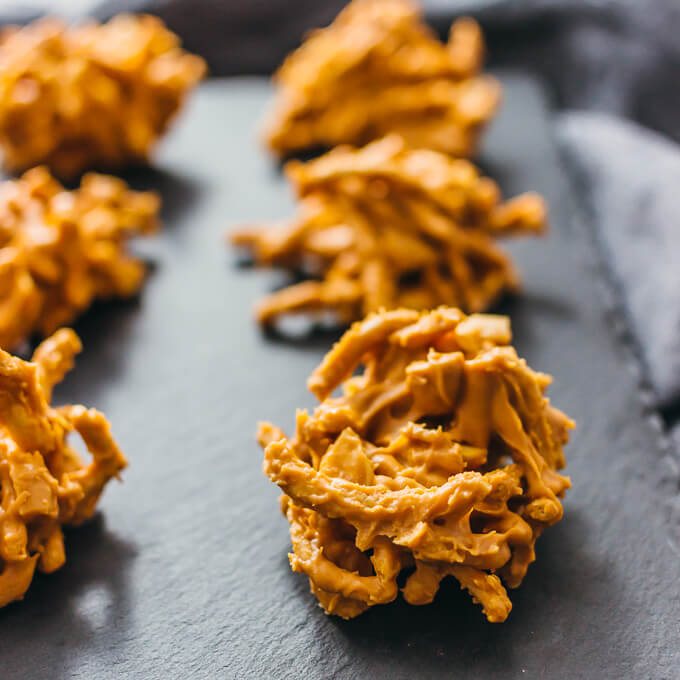 Who’s ready for a super easy recipe? This one has only three ingredients and could not be easier or faster. There isn’t even any actual cooking involved. These butterscotch haystacks can be made by anyone (please invite all of the kids you know), and are a great way to have fun in the kitchen. No precision necessary here.

All that’s involved is taking some crispy chow mein noodles and mixing them with melted butterscotch chips; as for how to melt butterscotch chips, my infallible method is microwaving them in thirty second bursts and stirring between until melted. 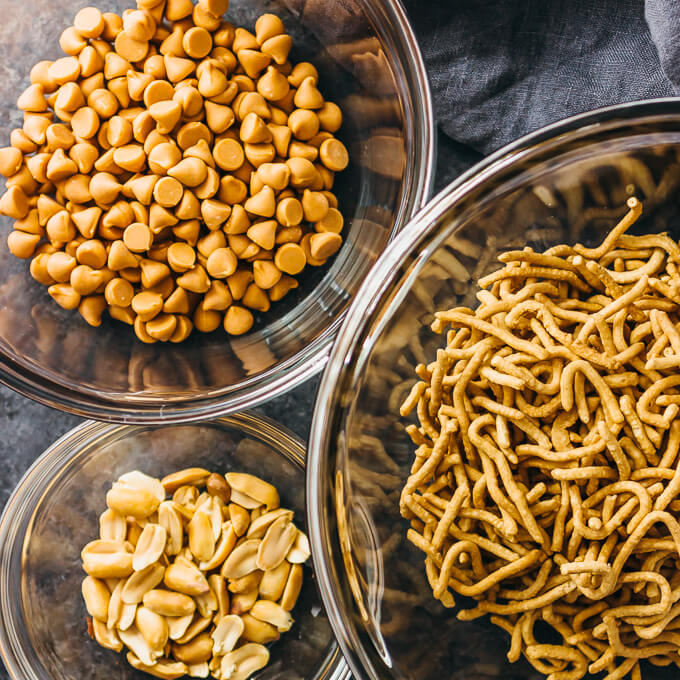 Butterscotch haystacks were one of Mr. Savory Tooth’s favorites when he was a kid — he has lots of fond childhood memories of making them in the kitchen with his mom. We think that he originally got the recipe from a kid’s cookbook, and I’ve tried to recreate it as best as I can. I thought about including some mini marshmallows, but Mr. Savory Tooth doesn’t like them in his haystacks so I omitted them here. If you include marshmallows, be sure to add more melted butterscotch to accompany them. 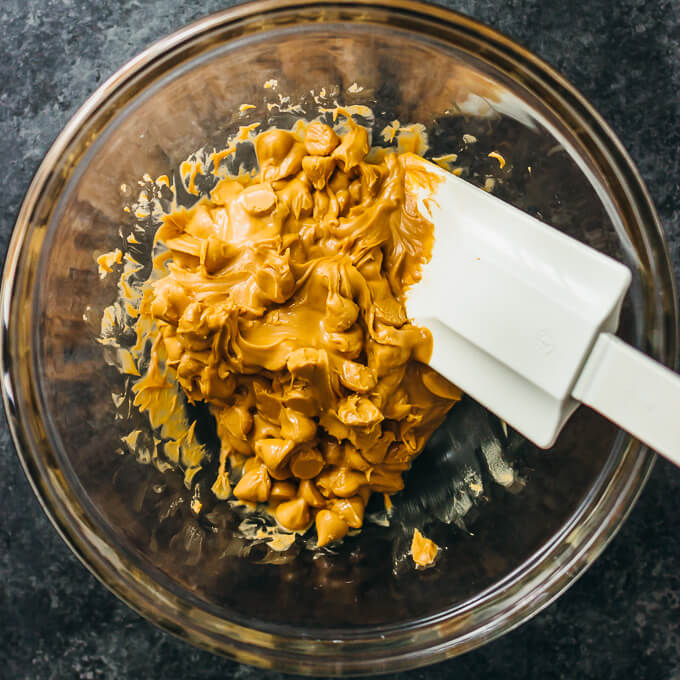 Make sure that you get the right kind of chow mein noodles; I found them in the Asian aisle of my supermarket and bought a 12 ounce bag by La Choy. As photographed here, you can see that these chow mein noodles are cooked, short “noodles” that are light and crunchy. They’re more akin to a snack item or salad topping than the noodles used in the actual chow mein noodles dish. 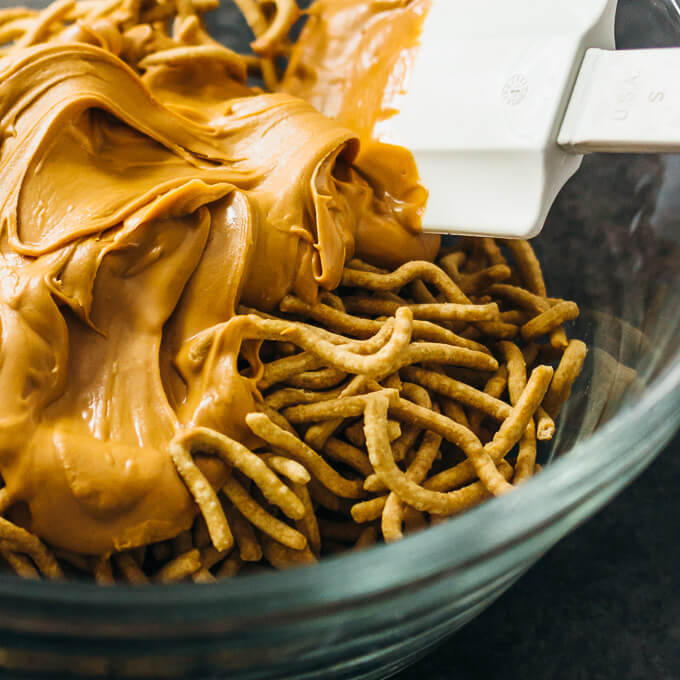 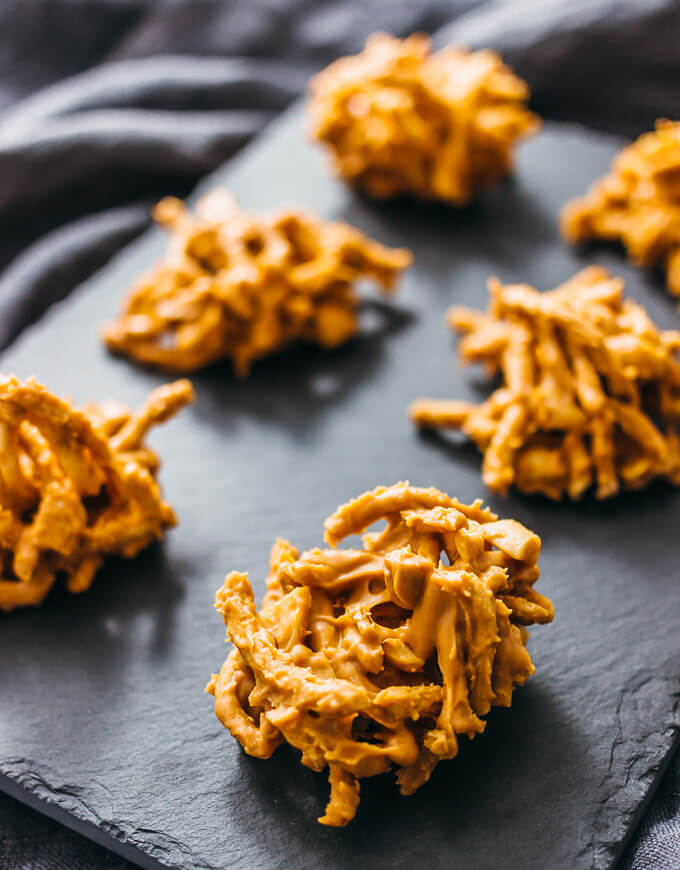 Instead of Chow Mein noodles, I use French’s Potato Sticks. Love the combo.

Are the peanuts salted? As a kid we just mixed the butterscotch chips and chow mein noodles. They sound delicious with peanuts!

My mom always used unsalted of course we had to shuck them! Now buy a jar lol
Also we did not chop the peanuts ….these are delicious.

Ok. I’ve a twist on this. Get a can of cream cheese ICING. 12 oz jar pnut butter. Dump both in bowl. Microwave 2 minutes. Stir. Mix in chow mein noodles. Spoon onto parchment paper

How many stacks does it make?? Sounds like a lot.

I am looking forward to trying this recipe. hope it turns out to be like the one I enjoyed in the 1950’s

Can I freeze these?

Absolutely, they freeze very well. You can make these haystacks well in advance, and once they’ve hardened, store them in a freezer bag for about 1 month.

Woow this is the wonderful recipe. so delicious to taste

These are fabulous! I substituted creamy peanut butter and returned to my teenage years when I discovered this yummy treat.

I always add peanut butter to my butterscotch chips to make it smoother. I have made these for years.

How long do these last out at room temp?

Once the butterscotch haystacks are set (hardened), you can store them at room temperature in an airtight container, where they should keep for at least a couple of days. If you store them in the refrigerator, they will last much longer.

Do they freeze well? 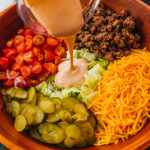 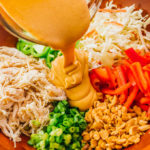 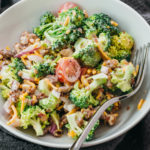