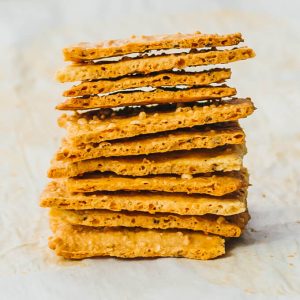 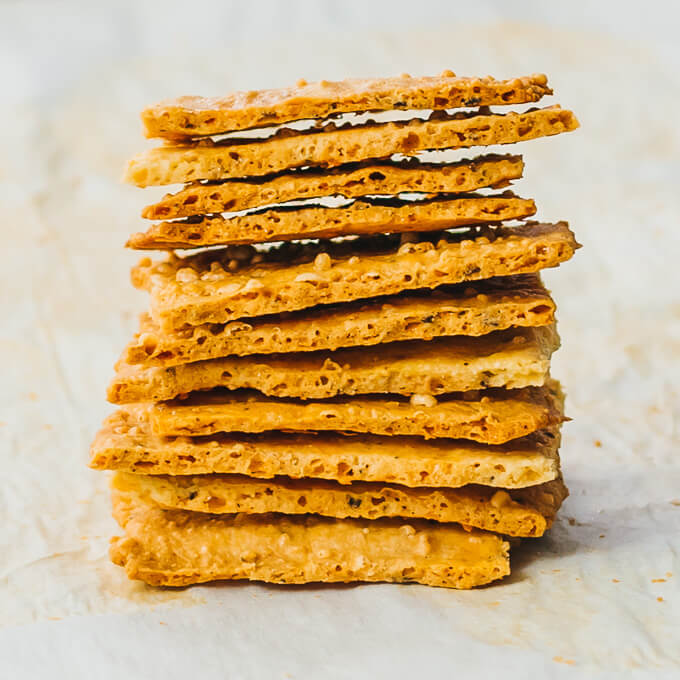 These baked cheese crackers are the best keto crackers that I’ve had — extra crispy and crunchy, and stiff enough to scoop up a generous amount of dip. They’re even sturdier than tortilla chips.

These crackers have a cheesy flavor from the parmesan cheese, but it’s not overwhelming. They’re relatively mild in flavor, which is why I use them as a blank canvas for dipping into artichoke spinach dip, hot crab dip with cream cheese, or hummus. If you’re new to a keto or gluten free diet, these healthy crackers can definitely fill the void of not having a vehicle for your favorite dips! 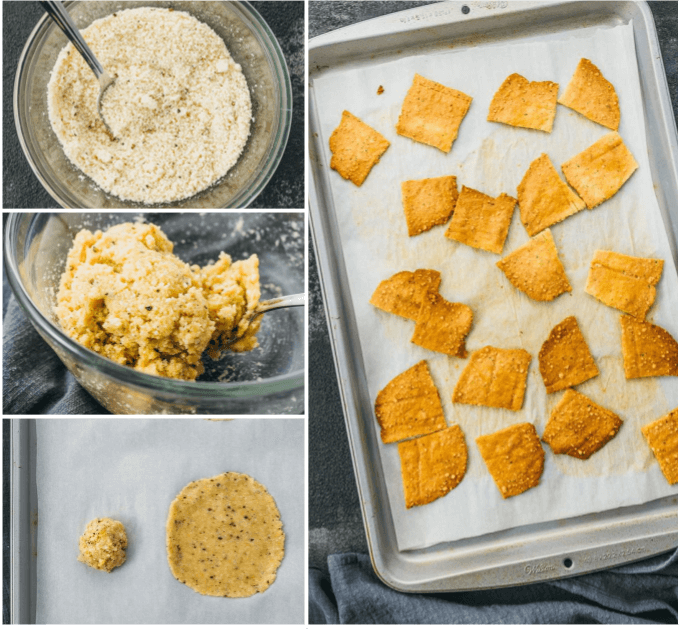 I’ve experimented with this recipe numerous times to optimize it. Here are a few tips for anyone making this the first time: 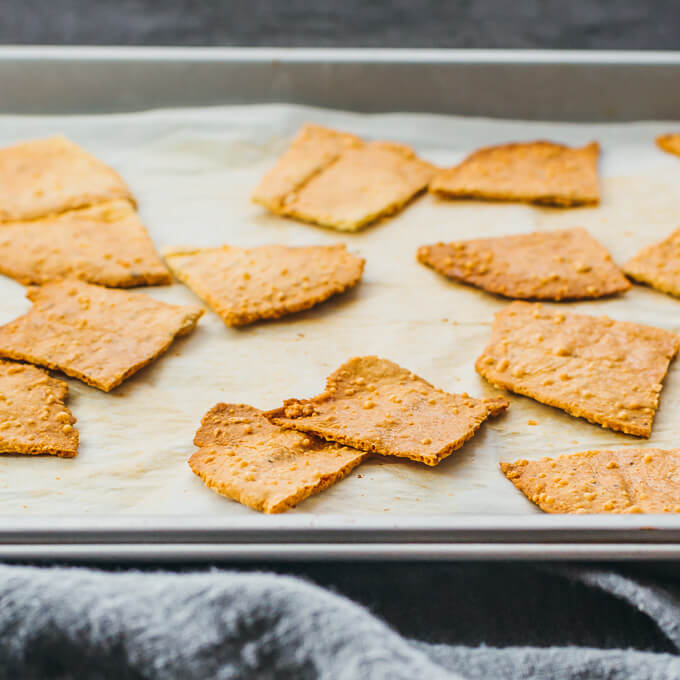 This recipe makes parmesan cheese flavored crackers. You can swap in other flavors such as:

And there are many other variations. Have fun with these mix-ins; I’d love to hear what you’ve paired these homemade crackers with.

ENJOY THE KETO CRACKERS WITH THESE DIPS: 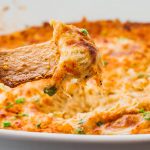 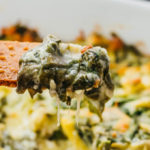 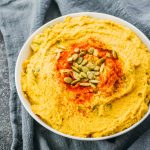 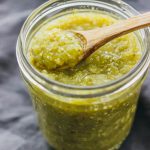 This recipe is awesome! Instead of brushing the top with left over eggs, I just used the whole egg and added 1/4 cup of more almond flour and it turned out great! Nice and crispy!

I did the same thing as “Jenn” did, plus I added 2 Tbsp. sesame seeds and 1 Tbsp. melted coconut oil. I used a 2 inch sharp cookie cutter and baked them at 375° for 15 minutes! Perfectly beautiful and perfectly delicious!

Thank you so much!!!! From the bottom of my heart!!!! These taste absolutely amazing!!! This is my 3d attempt at Keto, and it seems that this time, with the help of your recipes, I will succeed!!!

I tried some other recipes and just was not happy. They didn’t have the crisp I wanted. I felt like the parmesan would make the difference. It did. Wow did they smell good in the over! I am going to make these again and take them on a trip with some friends. I cut them up pretty small and plan to make several servings. They are going to be really good with some chicken liver pate I am making and I have some herbed sunflower seed dip. Thanks for the great recipe! I have been looking at your website and there are other recipes I plan to try.

I’m happy to hear this recipe worked out well for you, Sherry! Hope your trip goes well and that you get a chance to make some of my other dishes.

Thank you! I miss crunch and texture on Keto. I plan to use the recipe for tostada shells.

Newsletter
Subscribe and get the latest low carb recipes by email?
Vote Up1Vote Down  Reply
Julia

What a great idea. If you miss crunch, I recommend keto fried chicken.

I am not sure why using 1 egg will make it into dough. It was still way to grainy to form into a dough. I had to use at least three eggs before I could form it into a dough

That’s odd. I’ve never had trouble using just 1 egg to form into dough. Are you measuring out almond flour and parmesan cheese by weight or by volume?

I’m very confused. Using the same flour and parm you link to … I get 6 net carbs for the flour and 7 for the parm. At 13 net for the entire recipe, which you say is 2 servings of 8-10 crackers … how is it 3 net per serving? Thanks for your help!

Thanks for pointing that out. The linked parmesan cheese product was not representative of the kind that I use for these recipes so I have unlinked it to prevent additional confusion.

I use parmesan cheese that is pre-grated and found in the refrigerated sections of U.S. supermarkets, not the shelf-stable kind. The nutrition label for my parmesan cheese shows 0 for carbs per 1-ounce serving (due to rounding), and that is what I used to estimate the nutrition for this recipe.

I just made these yummy crackers. This recipe is great. I added some rosemary to mine and sprinkled some grated parmesan cheese on top before baking. They didn’t last very long. I’m gonna make another batch tomorrow.

Is it best to store these on the counter top or in the fridge?

Countertop. I usually eat them soon after baking, for optimal crispness.

I made these and using the nutritional information on the back of my Bob’s Red Mill Fine Almond Flour package these come out to over 32g of carbs for the recipe…I’m confused as to how you reached your calculations.

Different brands of ingredients, such as almond flour, can have very different nutritional information. My calculations are based off of the products that I use. If you click the almond flour link in the ingredients list in the recipe, note how it has 2g net carbs (5g total – 3g fiber) per 1/4 cup serving. That’s what you should aim for when selecting almond flour. I would avoid Bob’s if their almond flour is particularly high in carbs. Check if your grocery store sells a different brand, or buy it online.

What is the serving size

The serving size is 8-10 crackers.

Less fiber would cause a certain brand to end up with more net carbs.

If the almond skins are completely removed during the blanching process that would result in less fiber in the final product.

Lisa, I made these using Nature’s Eats brand superfine blanched almond flour which has just 3 grams carb & 2 grams of dietary fiber which = just 1 gram NET carb per serving. It does matter what kind of almond flour you buy.

Odd, I just looked up Nature’s Eats on Amazon, and I am seeing 3g net carbs (not 1g like you said) per 1/4 cup serving.

Can I ask why the dough isn’t cut fully through before baking?

You mean why it’s scored as opposed to completely cut through? I think it’ll turn out fine either way. I score the dough instead of cutting it completely because (a) it’s easier and faster, and (b) if you cut it all the way through, it may stick to your knife or drag the dough around instead of keeping it flat. If you cut it completely, watch the baking time… it might take less time to bake because there’s more surface area exposed to the heat.

Do you think I can add 1/4 a cup peanut Butter i or is it so cheesy that the taste will be off?

I think the taste will be a bit off. I would add a tiny amount and see how it tastes, like only 1 tablespoon of peanut butter to start.

Are the nutrition facts for 8-10 crackers?

Love how crispy they are!