Summary:
This low carb, keto friendly stir fry has ground beef and shredded cabbage cooked in a slightly spicy sauce. With just 7 ingredients, it only takes 30 minutes to prep and cook. For more easy recipes, visit One Pan Meals. 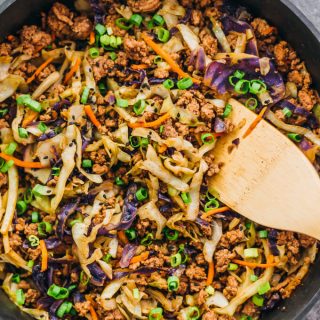 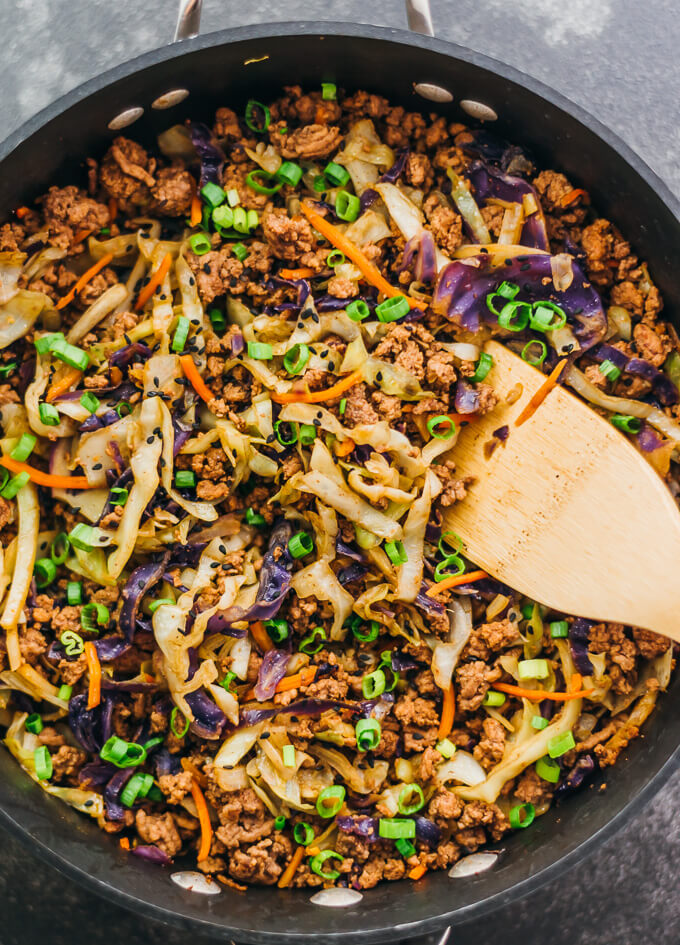 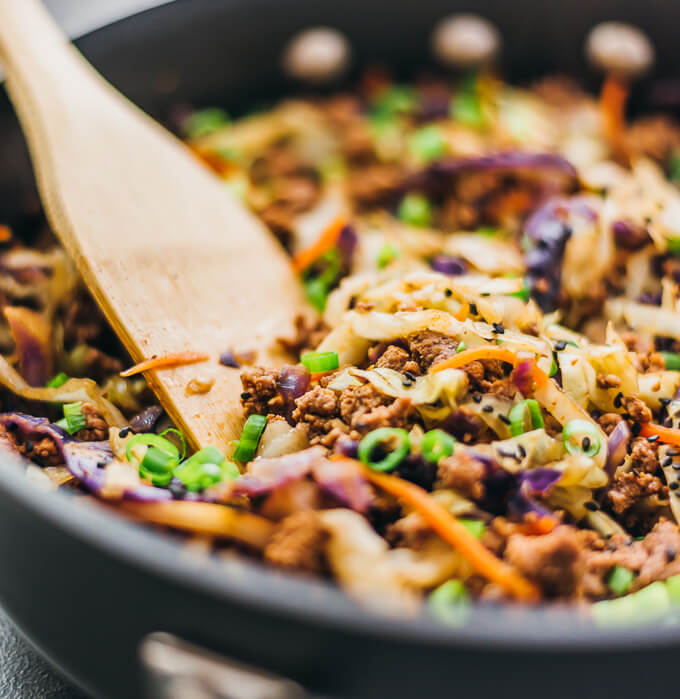 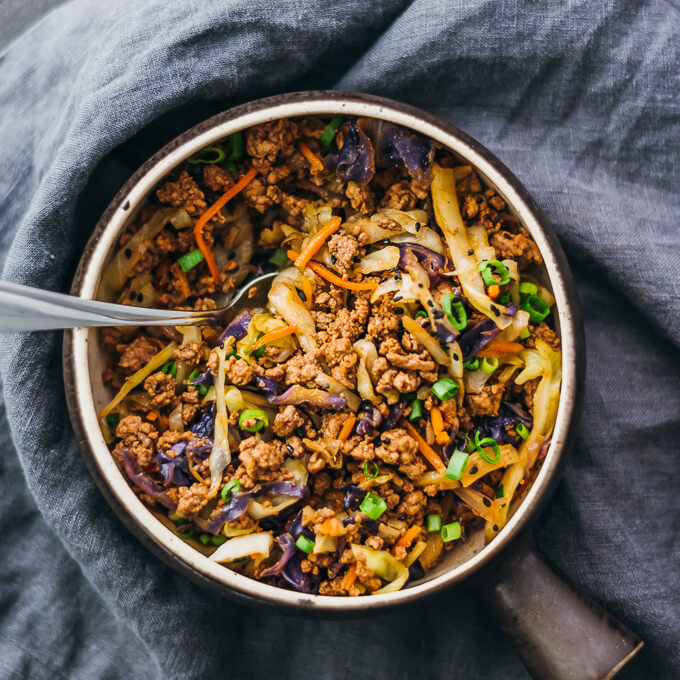 (1) Ground Beef. I typically use 85% lean. Don’t have beef? Use ground turkey, pork, or other meats. (2) Coleslaw Mix. Most U.S. supermarkets sell a pre-shredded bag of mixed cabbage and carrots, located in the refrigerated section next to salad kits. If you can’t find this, substitute with 5 cups of mixed shredded cabbage and carrots. This dish has a high beef-to-cabbage ratio, so if you prefer having more frequent bites of cabbage, you can increase the cabbage by an extra 50%. (3) Scallions. They’re also known as green onions. I use both green and white parts. (4) Soy Sauce. Both regular and low-sodium varieties work well; I use the brand Kikkoman. (5) Sriracha. I use the brand Huy Fong. You can substitute with another chili garlic sauce or your favorite hot sauce. (6) Pan. The pan should be large enough to simultaneously hold both ground beef and coleslaw. I use a nonstick 10-inch pan with 3-inch-tall sides. No lid needed. It’s not necessary to pre-heat the pan, and oil is not required. (7) Finishings. For a nice flavoring and extra fat, drizzle toasted sesame oil over the pan. Make sure to use toasted oil (it should have a dark amber color) or else it won’t be flavorful. Another idea is mincing in a few fresh garlic cloves. Both the sesame oil and garlic should be added at the same time as the soy sauce and sriracha. (8) Serving. Serve them with a refreshing Asian Cucumber Salad. If you have leftovers, cover and store them in the refrigerator for up to a few days. Reheat using the microwave or on the stovetop until warmed through. 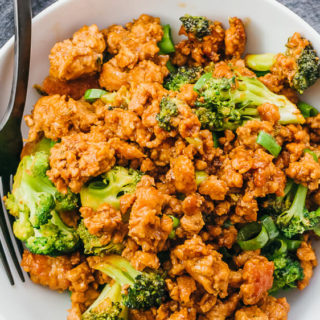 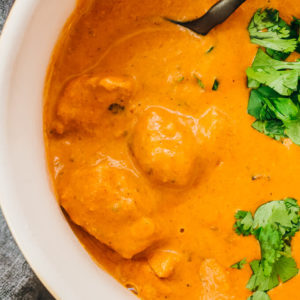 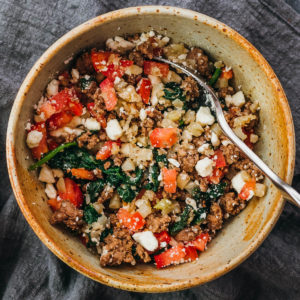 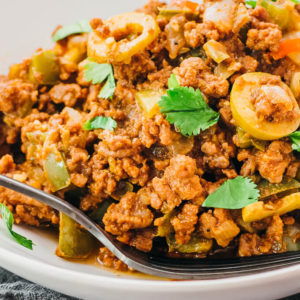 I added Worcestershire sauce, which a similar recipe recommended. I didn’t have fresh ginger, so I added powdered ginger. I wanted a touch of sweetness in the recipe. The first time I made it I added a tablespoon of teriyaki sauce (which has similar flavors to soy sauce). This time I used a tablespoon of Chivers ginger preserves, and it tasted better. (I understand that some of you are avoiding sugar.) I also added sesame oil.

We are in the middle of the flu epidemic, so I couldn’t get the bagged coleslaw, so I used bagged carrot sticks and a real head of cabbage. I bought a smallish head, but I still used less than half of it. Next week I’ll make it again and use the second half. Regarding the cabbage, I rinsed it after slicing it up, and no sand came out – not even one grain – so from now on I think I’ll just rinse the outside of the head. Cabbage, by the way, is one of those vegetables with low pesticide levels.

One recommendation: After cooking, there will be meat and vegetable juices in the bottom of the pan or pot. Those juices have a lot of the spices in them, so you should include some juice in each serving.

If you buy bagged veggies, please note that the bags (rinsed of any food) can be recycled with your plastic grocery bags at your supermarket. (Here’s the rule on recycling plastic bags: If the bag crinkles when you touch it, it isn’t recyclable. If it is a soft plastic, then you can recycle it. The only exception is plastic wrap, which isn’t recyclable. Pepperidge Farms bread is a good example of the two different kinds of plastic: The inner bag is crinkly and isn’t recyclable; the outer bag is soft and is recyclable.)

I feel like you just learned how to use parentheses

I’m a very picky eater and I really liked this dish. Used broccoli slaw instead of regular coleslaw and didn’t use any sriracha because I’m not a fan of hot. Definitely make again. Might add some fresh garlic and maybe mushrooms next time.

I made something similar to this, I added garlic and mushrooms and all I have to say is yes it came out amazing, you should try it. I didn’t add siracha or ginger (don’t like too much) but maybe next I will add the siracha since I do like a little spice! 🙂

Thanks for the input! I just saw this recipe and was thinking, I wonder if it’s good with garlic? LOL

I made this with ground turkey, sesame oil and garlic added and used more than 9 oz of cabbage; more like 12 oz. The flavor is very subtle but good. Added plenty of salt and pepper at the end. It’s basically 0 pts for WW.

This recipe saved a very tired essential worker! I am new to Savory Tooth and thought this recipe sounded easy and tasty and fast so already had ingredients on hand from 3 days ago. Spent a double shift with seniors needing help, came home late, tired and hungry and decided to try this recipe. OH, MY, delicious, FAST, EASY, filling, and rejuvenating. This was so fast and good and I thank you so much for sharing. I made it exactly as the recipe called for and did add the sesame oil at the end. In no time I had a delicious low carb meal that helped me regain some energy. There is a big plus for many of us when a recipe is fast and easy.

Delicious! I made this with ground Bison and will definitely be making this again!

Side Note: I’m glad I checked the soy sauce that I had in the fridge because Trader Joe’s Reduced Sodium soy sauce had 2 carbs and 1g of sugar per Tbsp and Kikkoman Less Sodium soy sauce only has 1 carb, no sugar, and 1 gram of protein per Tbsp. I know it’s not much but it adds up when you’re counting carbs!

Just made this for my husband and myself. Dont have to worry about the reheating instructions as we ate it all! Next time I make it, I think I will double the liquid ingredients.

I did mine different. I love it. I mixed 1 lb hamburger, coleslaw mix, and added scallions beef onion soup mix. No water. Added a little Tony’s and garlic and oh my goodness. It is wonderful.

I have made this for a long time, but i add rotel tomatoes and a little parmesan cheese on top when served. It’s a family favorite! I also usually add Hot Owens sausage and hamburger together. It definitely has a lot of spicy flavor. I am from Louisiana! Judy

I made this exactly to the recipe, unlike others and it was delicious.

Excellent flavor! Made as listed and used 90/10 ground beef.

5 stars if you add zero carb konjac noodles into like i do.

Made this following the recipe except no Sriracha… don’t like it., nor have it. Meal was filling, satisfying, and delicious. I’ll make this again.

Added some turkey smoked sausage, left over chicken and steak along with the ground beef 12oz of cole slaw mix and some egg! Like hibachi! Love it! You can mix it up next time I’ll add some shrimp!

I made this tonight. It was delicious! I used chili garlic sauce as I didn’t have sriracha. Using the raw coleslaw was such a great idea. This is the second recipe I’ve tried. Earlier this week I made the butter cookies. Thanks for the tasty quick recipes.

I made this, and used a higher-fat grassfed beef to get more healthy fats in. Came out fabulously and tasted terrific! My husband and teen daughters loved it!

I’ve never seen a stir fry quite like this. I’m amazed at how quickly this can be whipped up as well. Thanks for sharing this.

Can this be frozen?

Followed directions to a T and it was absolutely delicious! Making again on Sunday so I can have it as a work lunch for the week. Truly that kind of good!

This was very easy to make, ingredients easy to find and great for budget shopping (which we are), but over all it was just fine. Family wasn’t overly impressed with it and won’t miss it if it not made again. One of the kids used it over left over rice said it seemed better.

Quick easy and delicious. Most of your recipes have been great over the last two months I’ve been doing keto.

This is insanely good! My husband is SUPER picky and won’t eat carbs. He has asked for this several times in the last few weeks. I added sambal olek as suggested since I like things super hot! Fabulous recipe – I just used a head of cabbage that I shredded in my food processor.

Is this a good recipe to make ahead and reheat for lunches?

Yes, this recipe should reheat well for lunches. You can probably make it up to a few days in advance.

Here are the changes I made:
1. I substituted ground chicken for beef
2. I doubled the sriracha, and added 1 tbs of Mirin to the sauce
3. I added some minced garlic toward the end of browning the chicken
4. After cooking everything together for a couple minutes, I add 1-2 tbs of a corn starch slurry (corn starch mixed with equal parts cold water mixed up real well) to thicken up the sauce. This step isn’t necessary if you’re serving it over rice, but I think it’s better!
5. Drizzle sesame seed oil and sesame seeds over the dish when serving

Such a quick, tasty recipe. Loved it and easy clean up, too. Thanks for sharing.