Summary:
Cold nights are perfect for enjoying Icelandic Lamb Stew with meltingly tender meat, thanks to searing and slow-roasting in the oven. It’s a hearty lamb dinner that’s great for low carb, keto, and paleo diets. 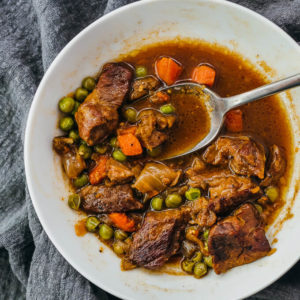 I use lamb shoulder chops because they’re inexpensive and deeply flavorful when slow-roasted until fall-apart tender.

For this recipe, you can use two types of lamb shoulder chops:

I usually use a mixture of these two types of shoulder chops, depending on what’s available at the butcher. Avoid lamb shoulder roast, which is difficult to remove the bone.

When carving out the bone, it doesn’t have to be perfect. It’s fine if there’s some meat still stuck to the bone. Since the bones are cooked along with the rest of the stew, the meat will fall right off when it’s time to remove and discard the bones. You won’t end up wasting any meat.

This recipe is inspired by my trips to Iceland, first in 2016 for two weeks exploring the north and west, and second in 2018 for one week exploring the south.

I enjoyed several delicous lamb stews during these trips. Since it’s a traditional dish, pretty much every chef and family in Iceland cooks lamb stew and has their own version of it. What they all have in common is very fresh lamb meat.

I began experimenting with this recipe during my first trip, using the kitchen in my rented house, so that I could take advantage of the fresh Icelandic meat available in local markets.

My goal was to keep the dish simple in terms of ingredients so that the natural lamb flavor really shines through. Even though the ingredient list only has some basic stew vegetables and seasonings, the lamb is given the full treatment via searing and slow-roasting, which brings out its rich and savory meaty flavor.

In Iceland, sheep are free-range and allowed to roam the countryside during summer. They are literally everywhere, often in groups of three, heads down and munching on grass and berries nonstop. It’s hard to miss them.

Since sheep outnumber people in Iceland by a factor of 3, it’s easy to see why lamb stew is one of the most popular and traditional dishes in the country.

Icelandic sheep also love hanging out on the road — see above photo of them crossing the road during my first day in Iceland. They can be really stubborn, so you’ll have to honk loudly to get them to move along. 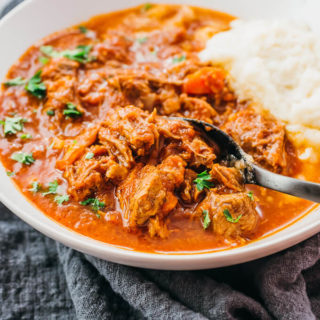 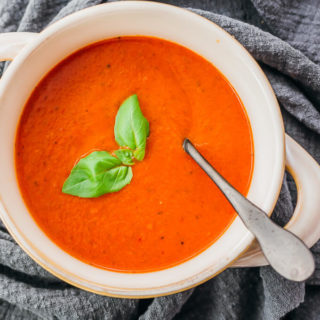 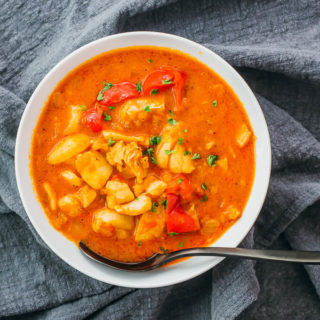 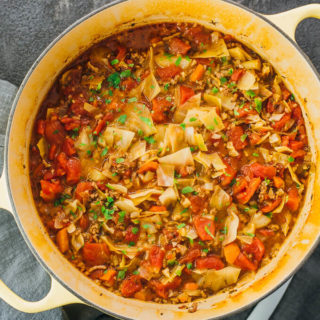 I spent a year in Iceland in 1989 while I was in the military. Our dining hall at Rockville served lamb for Wednesday lunch. It was the highlight of my tour, that and the ysa (cod/haddock) and lamb dogs. I eat leg of lamb at least monthly. One of the simplest meat cuts to prepare.

I’ve looked at many recipes and this is the closest I’ve seen to the soup/stew we had at Gulfoss! Can’t wait to make it!

I too have been trying to find a recipe to duplicate that one! I am making this tomorrow and am very excited about it.

My wife and I visited Iceland in 2008 when it was not as popular as nowadays. It was great trip and I still remember the taste of stew at Gulfoss. I will definitely try this recipe.

I may try my hand at this recipe. My husband and I went to Reykjavik, Iceland September 2016 and it was a trip of a lifetime. It’s absolutely beautiful landscape with many gorgeous waterfalls. We did the Blue Lagoon and several other sites including watching the Northern Lights. The lamb stew we had there was simply delicious and wish we could have brought some home.

That was around the same time I was there 🙂 Glad to hear you also had such an amazing time!!

Do you have any suggestions for how this recipe might be adapted for the instant pot? I had lamb stew (or, as they called it, meat soup) when I was in Iceland two years ago and it was amazing! I’d love to cut down on the cooking time if I can, though…

I’m planning on publishing a recipe for Icelandic lamb stew in the Instant Pot, but I’m not sure when it’ll be out. In the meantime, if you’re interested in lamb dishes in general, I highly recommend these braised lamb shanks: https://www.savorytooth.com/lamb-shanks/

This was DELISH, thanks for sharing!

I haven’t tried lamb before. But yours looks wonderful.

This looks amazing! Even though I’m Swedish I honestly didn’t know that lamb was particularly common in Iceland, but it makes sense I suppose! Will definitely try this recipe.

I look forward to trying out this recipe. I stocked up on Icelandic lamb at Whole Foods (at least in the Washington, DC area) after my Icelandic “adventure” last month. The WF folks said that it is available in early autumn…If you have WF, check it out….Cheers!

I do have a Whole Foods near me so I’ll have to check out their lamb selection. 🙂 Which places did you visit in Iceland?

OMG! I am jealous! 🙂 🙂 Iceland has been on my bucket list like forever! 2 weeks!Wow! It must have been an adventure of a lifetime! The picture with the sheep reminds me of Ireland though 🙂 and I had a similar one! I don’t know much about lamb – I’ve tried it 2 times and it’s not my thing but your stew looks yummy!

I’ve also been wanting to go to Iceland for a long time and it did not disappoint! 🙂 I did some outdoorsy stuff (glacier hiking was prob my favorite) and also went on a food tour in Reykjavik, which was awesome 🙂 You should definitely go — flights to Iceland are pretty cheap right now!

Oh I wish I could but unfortunately not possible in near future. Anyways, what other typical Icelandic foods/dishes you’ve tried? I don’t think I know any. Oh, I think they eat puffin meat, right?

Yes, they eat puffin meat! 🙂 Icelandic food is all about dairy, lamb, and fish. So they pretty much eat skyr yogurt for breakfast, lunch, dinner, and dessert. They also have lots of seafood dishes like cod, fish balls, fried fish, and lobster soup.

Just now on road returning from Iceland. Their cultural event was on when there as well .. the food is delicious… the countryside is gorgeous.. buildings are mostly modern…
Trip of a life time!
Dress for it’s unpredictable weather.

Been looking for Icelandic recipes.