Summary:
Artichokes are an easy low carb, keto appetizer that you can make in the Instant Pot pressure cooker. Paired with a spicy garlic mustard dip. 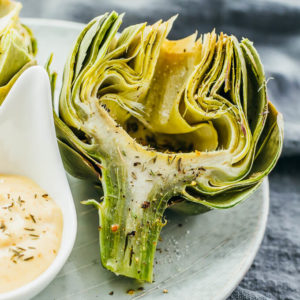 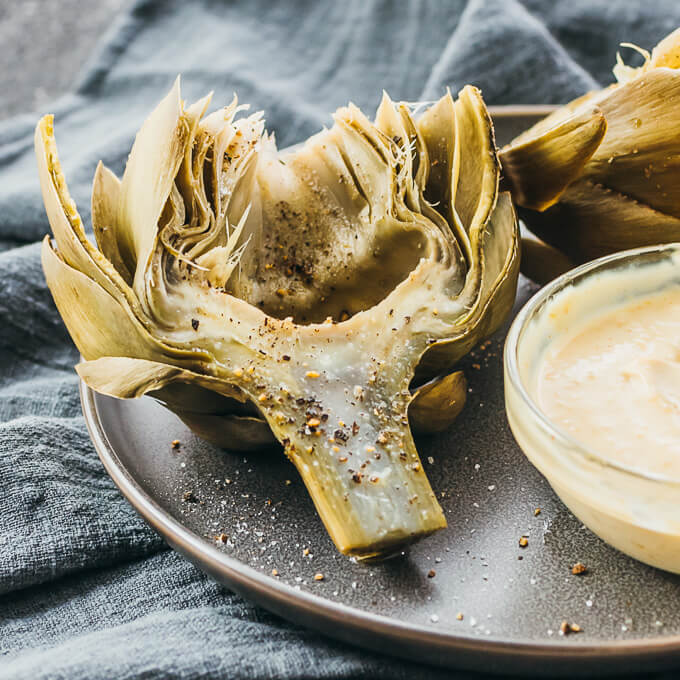 I’ve always been obsessed with artichokes — it comes with growing up in California, which produces nearly all of the artichokes eaten in the U.S. — and I almost always order them when I see them on an appetizer menu. Last year I shared my foolproof method of cooking artichokes so that they’re perfect every time, and a lot of readers chimed in that their favorite method is actually via pressure cooker.

Using my Instant Pot‘s steam function, I find that pressure cooked artichokes come out amazingly tender with fall-apart leaves. It’s so tender that even the stem is edible, which is not always the case with other cooking methods. I serve these artichokes with a spicy garlic mustard dip, adding a nice zing to every bite.

How to cook artichokes in the Instant Pot pressure cooker: 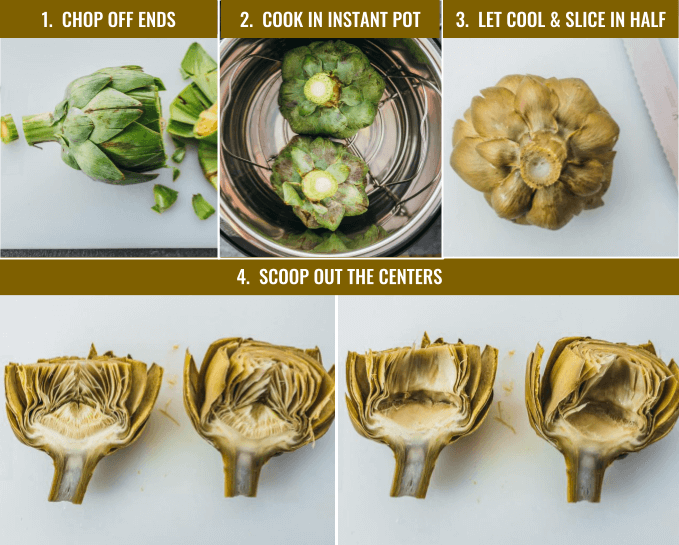 First, I prepped my artichokes as I usually do: cutting the stem so an inch remains, slicing off the top third of the artichoke, and rinsing it well. I added about 1 1/2 cups water to a 6 quart Instant Pot, so that the water level barely touches the trivet. I used the trivet that came with my Instant Pot, which is a simple metal steam rack that fits the pot.

The artichokes only need 10 minutes of pressure cooking followed by a 10-minute natural release. I’ve tested this on both small and large artichokes, and in all cases it resulted in a very tender vegetable. It’s easy to test the doneness of the artichoke: pull off a leaf and it should come off with no resistance at all. You’ll want the artichoke to be very tender — there’s nothing worse than a partially raw artichoke heart. 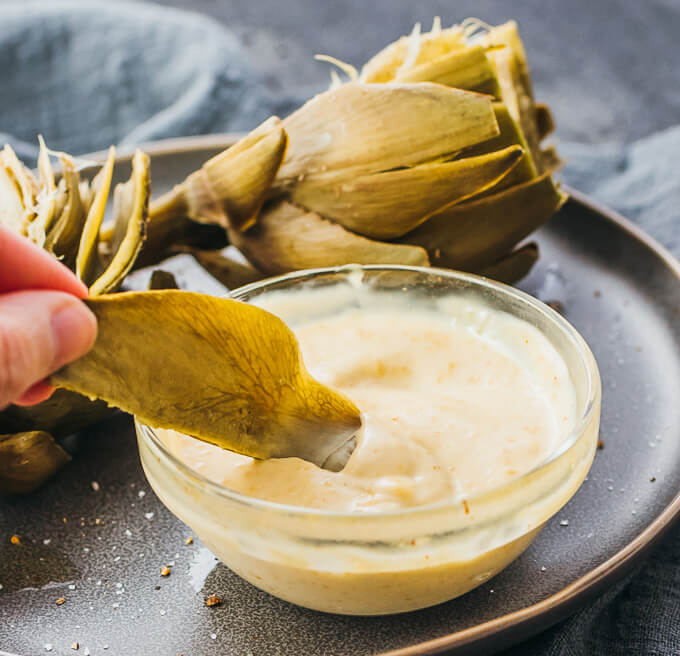 To eat the artichoke, simply pull off one leaf at a time and dip into the sauce, scraping the “meat” off the leaf with your teeth. I really like the artichoke dip here — it’s slightly spicy, a bit mustardy, and has definite hints of garlic in it. Very delicious, so I highly recommend it, and it only has 4 ingredients. You can find another artichoke dipping recipe here.

As you make your way towards the center of the artichoke, the leaves will be more tender, so in some cases you might even be able to eat the entire leaf. When you’re finished with all of the leaves, you’ll be left with just the heart and stem, both of which should be completely tender and edible. They’re the best part.

Overall, I would rate pressure cooking as slightly better than the boiling method advocated in my previous how to cook artichokes post. Pressure cooking takes slightly less time (20 minutes for cooking and steam release) than boiling (30 minutes), and it’s nice not having to fuss over a pot of boiling water. However, if you don’t have a pressure cooker or Instant Pot handy, boiling is still going to be your best infallible method. 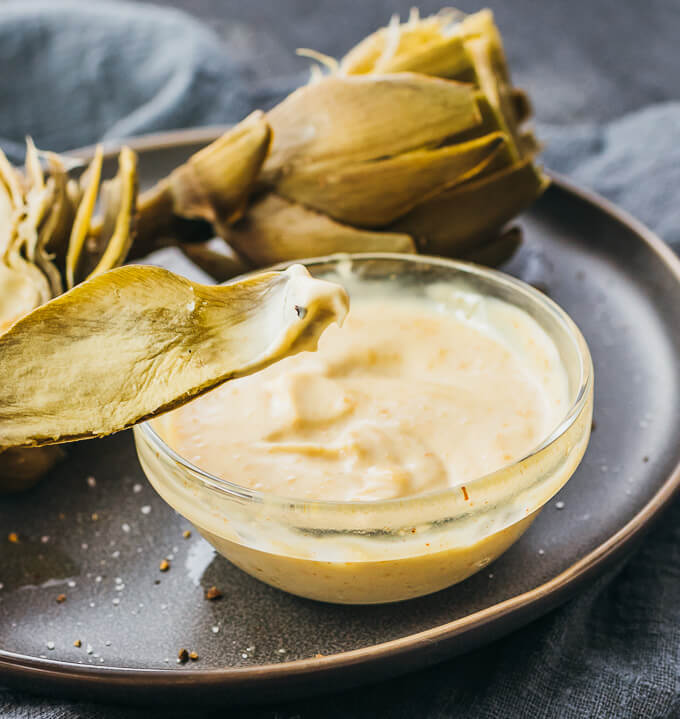 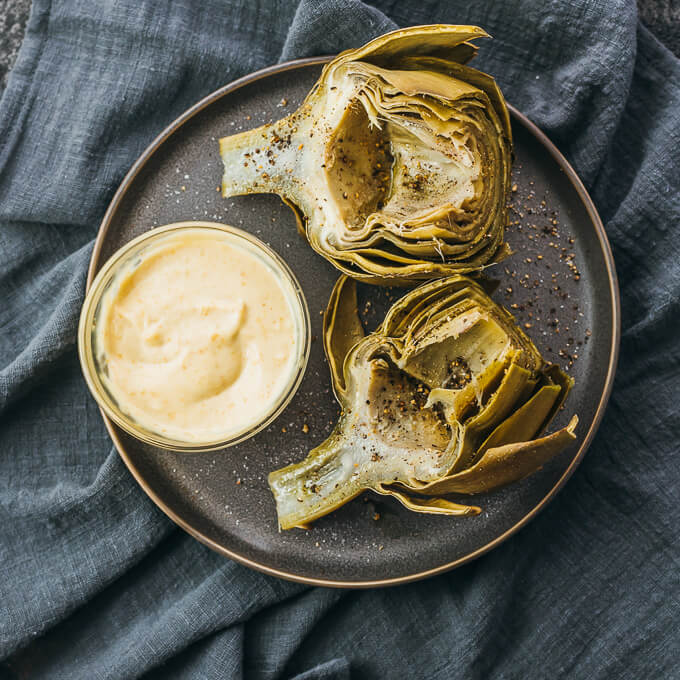 It’s much easier (and faster) to cut the artichokes in half lengthwise & scoop out the choke BEFORE cooking. Layer them cut side down in the IP (or any pressure cooker or steamer, for that matter), and steam until done. Boiling steals nutrients and flavor – steaming or pressure cooking is the only way they should be cooked. We used to drive over the hill to Castroville on the weekends for the giant Globes…so yummy!! Your dipping sauce sounds yummy too!! I usually use clarified butter, lemon and garlic, but will have to give yours a try!

The reason I’ve been cutting the artichokes in half after cooking is because the cooked artichokes are a lot easier to cut than raw ones.

Is it possible to make these and save them for later? Wondering how you preserve freshness… would the best way be to leave them in the Instant Pot until dinner or overall just wait to make them until dinner?

I usually prefer to eat my artichokes soon after cooking, but that’s my preference. Some people enjoy them cold. I think they’re great either way, and you can also try reheating them in the oven right before you’re ready to serve.

I followed your recipe for the artichokes but did a simpler dip with just melted butter, lemon juice, and minced garlic. Yum!

I am so grateful for this recipe! My artichokes turned out amazing. Nice and tender with more flavor. I will never boil again. Thank you for sharing 💛

My first solid food was artichokes. My mother would scrape the meat off each leaf and feed me by spoons full. Really time consuming! Still love them.

I tried this recipe twice. Both time the outer leaves where more overcooked vs the central heart. If there is a way to cook the artichokes more evenly, then this would be very good. Any recommendations?

It’s possible that your artichokes are smaller than the ones I use, resulting in outer leaves more overcooked compared to the heart. You may want to try decreasing the pressure cooking time by a few minutes or reducing/omitting the natural pressure release time.

We LOVE this artichoke dip.

Can I put in 4 articokes?

That should be fine. Check for doneness after pressure cooking by pulling off a leaf (should come off with no or little resistance) or inserting a knife into the stem (should be effortless). If it’s not done, do another pressure cooking cycle for 5 minutes.

Do you have to have the trivet? I don’t have one…

Do you have a steam basket? That would also work. Or you can elevate your artichoke by using aluminum foil to create a trivet of sorts.

I dont have an instant pot but the other kind of pressure cooker, unfortunatly it did not have enough space to steam one let alone 2 med artichokes. So I just boiled them which work out ok..
But I did try your dip, it was yummy even without the thyme (ran out apparently)
Thank you for you recipes

You’re welcome, Wendy! I’m glad it still turned out well for you.

I just made this and the artichoke HEART was the most tender and delicious thing I’ve ever had. THANK YOU!

The trivet is just the steam rack that came with my instant pot, right?

That dip is mindblowing. I licked it all up!!

Very useful step by step photos. Mine came out incredibly tender and my whole family loved it.

Can’t believe I used to be so intimidated by artichokes!!! Your photos and recipe made this so easy to make.

I laughed when I saw your last instruction step on how to eat it… I totally needed it as I’m new to artichokes!!

My first instapot recipe and came out really well. Thank you!

I’m from CA too and LOOOOOVE artichokes. After making this, I’m definitely preferring the pressure cooker method over others.

The only thing missing is how to choose a good artichoke? It’s like choosing cantaloupe. Get a bad artichoke and no way of cooking the little boogers is good enough. So, cooked 3 medium sized artichokes last night. I think the altitude here in Denver affected the tenderness. I actually went 11 minutes just in case and I think I need to extend the time to 14-15 mins next time. There were a few leaves that had a decent amount of flesh but the leaves weren’t tender enough to scrape all the flesh off.

The sauce was just OK for me. We’ve used out own recipe for years. I think we prefer a milder mayo sauce so the flavor of the artichoke isn’t overwhelmed. I usually mix mayo with a tbl of lemon juice and add some curry to the mixture. Just enough for a mild curry flavor.

If anyone knows how to choose a ripe fleshy artichoke I’d like to know? I’ll try the instant pot method again but maybe wait till I see a thicker artichoke.

That’s too bad that yours didn’t turn out well. I’ve used this pressure cooking method for artichokes of all sizes, even tested with different pressure cookers, and it’s always produced super tender artichokes.

Same thing happened to us. We live in Aspen, 8000 feet elevation. 10 minutes was nowhere near enough time to cook the artichoke. Going for 20 minutes next time. Dipping sauce is great

wow, I live in denver and had the EXACT same thing happen to me! 3 whole artichoke in my instant pot, 10 min, then 4 more, then 5 more min (all quick release) and they were not tender at all!! we were so disappointed. we will try again though- cooking only 2 at a time.

you have to adjust cooking time for Denver’s altitude. Cooking time adjustment for altitude is discussed on other sites.

This is fascinating. I have no idea what an instant pot is, nor do I want yet another piece of kitchen equipment, but I am impressed!

It’s a multi-cooker — does pressure cooking, yogurt, rice, slow cooking, etc.
I have a version of this recipe for those who don’t have an Instant Pot: https://www.savorytooth.com/how-to-cook-artichokes-perfectly/

I felt as you do, Mimi, until half a dozen friends piped up about their new IPs. So I bought one – the small size. Now I’m an enthusiast! Foods emerge tasty but not soggy, unlike some cooked in regular pressure cookers; and because the cooking time even for, say, tough cuts of meat is so reduced, flavors stay distinct, unlike some cooked in slow-cookers. If you treat yourself to one, toss the useless, badly designed and near-incomprehensible recipe booklet that comes with, and treat yourself to Melissa Clark’s book “Dinner in an Instant” (New York: Clarkson Potter/Publishers, 2017). Clark is a food writer for the NY Times, and a good one. In this small volume are approaches and techniques that can be adapted for many other recipes.

I just discovered the deliciousness of artichokes this summer- and man, am I upset it didn’t happen sooner. LOVE these little guys!

My first home, after I got married 46 years ago, was in Monterey California. Cooking artichokes was one of my first culinary triumphs. I used the classics method of boiling them and flavoring in water with bay leaves, lemon,etc. I am a new instant pot owner and I’m trying lots of techniques and recipes. It’s quite fun. Will putting the same herbs in the water and pressure cook the artichokes produce the same results and infuse them with flavor? Your advice is most welcome.

Hi Andrea! Putting herbs in the water and pressure cooking the artichokes will add some flavor, but not as much compared to the boiling method. I usually add spices and seasonings after it has finished cooking for extra flavor. Let me know how it goes if you give it a try!

Have you ever microwaved your chokes? You prep them the same way but also cut in half lengthwise. Put in a covered casserole container (or other microwaveable covered container) add a little water and a few slices of lemon and microwave for 10 minutes. I love this method because it’s so fast! And they turn out great- not soggy.
Your sauce looks yummy! I like mayo with lemon and thyme sea salt.

Hi Sarah! I haven’t tried microwaving before, but that sounds great and I’ll have to try it out.

Ok, I admit I am obsessed with the color of the artichoke in your post….fab! But I do get wildly intimidated by the chokes. Thanks for the little nudge to try again!-Laurel