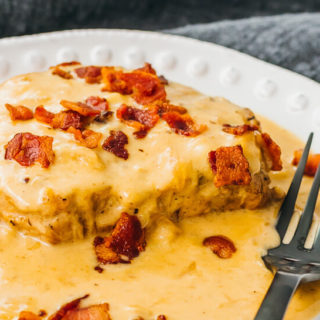 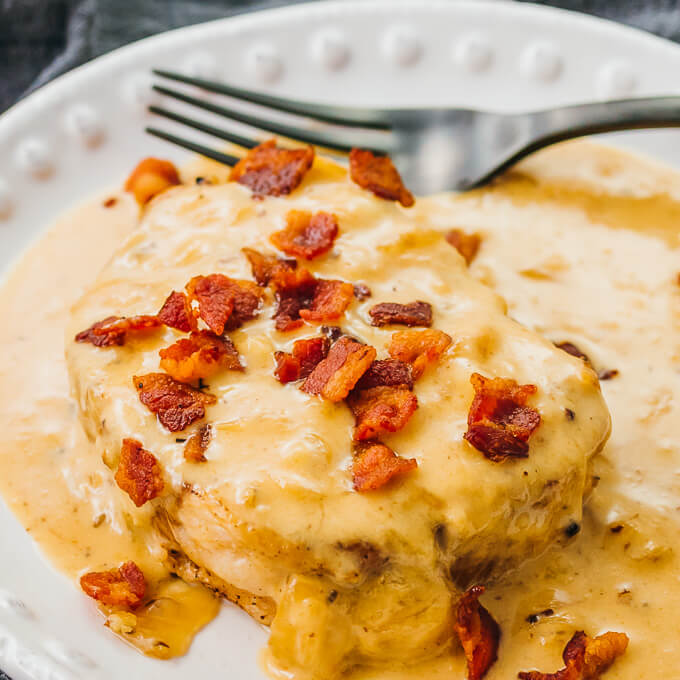 Pork chops are a lean cut of meat, available as both boneless and bone-in. This recipe uses a boneless center cut, about six to eight ounces per individual chop.

Bacon plays multiple roles in this dish, providing grease for frying the pork chops as well as forming the base for a flavorful creamy sauce. The crispy bacon bits add extra richness and crunch that well complements the creaminess of the dish.

Similar to my pork tenderloin dishes — both roasted and pressure cooked — these pork chops are paired with a Dijon mustard gravy that’s very low carb and fantastic for anyone on a keto diet, coming out to only 3g net carbs per serving.

The boneless pork chops should be as evenly sized as possible. Pay attention to their thickness when selecting them at the grocery store; ideally, the individual chops should be less than 1 inch thick. If you have thinner or thicker pieces, they will not cook at the same rate and you may need to pressure cook for shorter or longer periods of time to compensate.

The bacon should be diced. Line up the bacon slices on top of each other so you can cut through multiple slices simultaneously. Another way to dice them is to use kitchen shears and snip through them, which you might find easier than using a knife and cutting board. 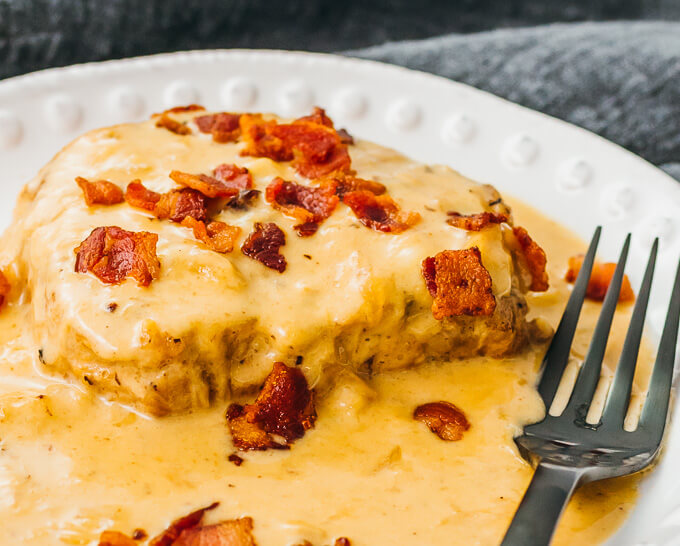 I use a 6 quart Instant Pot, but it should also work with other sizes since the pork chops don’t take up a lot of space in the pressure cooker.

I recommend using a full natural release, which took 18 minutes for my pressure cooker. You’ll know when it’s done because the pin will drop when the pressure has completely released.

Avoid a quick pressure release because the pork chops may come out tough. During natural release, the pork chops are still cooking, and you’ll be skipping that part if you do a quick release.

If you’re wondering what to serve with pork chops, I suggest a side dish of mashed cauliflower, steamed broccoli, or brussels sprouts.

Leftovers? These pork chops reheat well in the microwave and maintain their tenderness. They should be reheated with the creamy sauce, but not with the bacon. Store the bacon separately to keep it crispy. 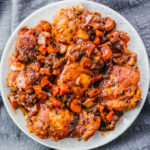 so easy to make and sooooo good!

I’ve made this several times and both me and my husband absolutely love it!

Is this something that will last for meal prepping? I love your recipes and looking for the best ones that I can use for meal prepping that would taste just as a good a couple days later. Any suggestions? Thanks so much!

I’m not sure how well these pork chops will reheat. For meal prepping, I suggest any of the Instant Pot soups on my site such as the Salsa Chicken Soup or Ground Beef Cabbage Soup — those are my favorites and you can make a large batch at a time. If you like salads, I’m a big fan of Southwest Chicken Salad, which is also really easy to prepare. Hope that helps!

This recipe is so easy and the flavors are amazing! This is going to become a regular in our home.

I have made this recipe at least four times, it is my all time favorite, cozy time food. So delicious, I can eat half the recipe in 1 meal. Nobody should really do that, I just have no self control… what can I say? It’s just too good.

I just made this. It was wonderful. I would like the gravy a little thicker.

I don’t have many staples in my home but this has become one! It’s delicious! Comes out perfect every time! Thanks for sharing!

Can you use a different cheese?

Sauce is to die for! Chops still came out dry. Used <1" and didn't change anything. Would cooking less time help? Suggestions please?

Julia Hi I would love to cook all of you recipes but I do not have and Instant Pot, what do you suggest, I just started losing weight using your recipes I don’t want to stop now what can I do for the recipes that call for the instant pot?

Hi Robin! The easy solution would be to simply skip them — the Instant Pot recipes all contain the phrase “Instant Pot” in the title so you can simply avoid clicking on them. Depending on the recipe, some of them can be easily converted to a stovetop version if you’re confident about experimenting. Another thing you can do is leave a comment on recipes that you’re interested in, and I can chime in to provide suggestions on how to make this without an Instant Pot. Also, keep in mind that the Instant Pot is just an electric pressure cooker, so any other brand would also work.

I want to make for dinner tonight.. can I do more than 3 chops? Feeding 6 people!

You can proportionally increase the ingredients as needed, and the pressure cooking time should remain the same. Some things need to be adjusted, like searing the pork chops in batches since they won’t all fit simultaneously.

In your recipe it says layer in a single layer. How will this cook with multiple pork chops layered on top of each other?

I’m able to fit the pork chops side-by-side in a single layer. If you can’t, then in Step 2 saute them in batches and in Step 5 you can let them overlap each other.

These look delicious and I will be trying them, but they make me wonder about something else. In your chicken in mushroom gravy you said you wanted to do it with pork chops but weren’t sure how to do them in the Instant Pot. Now that you have figured out how to do pork chops, I wonder if you have tried them with the mushroom gravy? It reminds me of the pork chops my mom made that was a favorite of mine. She would brown them and then cook low and slow in an electric fry pan and it seems like it could be adapted for the Instant Pot. I might experiment but would love you input if you have tried it.

Hi Judy! I haven’t tried it, but I think it would work well with this recipe. Take the mushroom gravy ingredients (cream, water, cheese, etc.) from the Instant Pot Mushroom Chicken recipe and add them after the pork chops have finished pressure cooking. Turn on the saute mode and stir as it thickens up. Hope that’s helpful 🙂

Thanks Julia! Yes that is helpful. I’m going to try this sometime later this week and will let you know how it turns out.

Just made these pork chops…AMAZING!! I used bone in chops and did not have to adjust the time.

Wondering why someone would want to take 45 min to cook this in the instant pot when u can cook it in 1 pan on the stove in less than 20? Seriously asking 🙂

Not everyone uses the Instant Pot for its cooking speed; there are a number of other reasons to do so. Pressure cooking is simply another way of cooking, just like baking, grilling, etc. Not everyone chooses a mode of cooking simply for how fast it can cook something. Otherwise I’d be using the microwave every time 😉

These were so good! I followed the recipe exactly and they turned out great. I will definitely be making these again!!

Made this tonight and it was pretty good. This was my second instant pot recipe and it was super easy to follow. I left out the onions because I have a few picky eaters in my household. (I did season the chops with a little onion powder though so it still had the flavor). Used chicken broth instead of the water and used lactose free milk thickened up with a little corn starch instead of the cream. Worked great. Served with mashed potatoes and applesauce. Yum!

Oh this looks soooo good!! I’m not a fan of mustard..could I use powdered ground mustard instead?

This was delicious. I did make the sauce in a pan to speed things up so it was ready when the chops came out of the Instant Pot. The sauce was so good and the chops were fork tender. Husband said it was a definite keeper.

Hi, this looks absolutely delicious! I don’t have whipping cream on hand but could I substitute half and half? Thanks!

That would probably work. Sauce might be a bit thinner but should still be delicious.

This is my favorite instant pot recipe. So easy and perfect everytime.

Can this be doubled? Does the cooking time change?

Keep the pressure cooking time the same. Some things may need to be done in batches, e.g., the pork chops won’t be able to all fit in a single layer when browning them.

This sounds good but I have bone in pork chops. Can I use them instead of boneless pork chops?

I haven’t tested this with bone-in, so I can’t say how it’ll turn out. You might need to tweak the pressure cooking time a bit. If it were me, I’d just remove the bones before cooking with it.

This was yummy and easy! Five stars!!!

Awesome! Hope you get a chance to make this again, Cheryl.