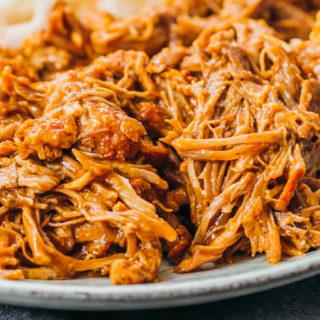 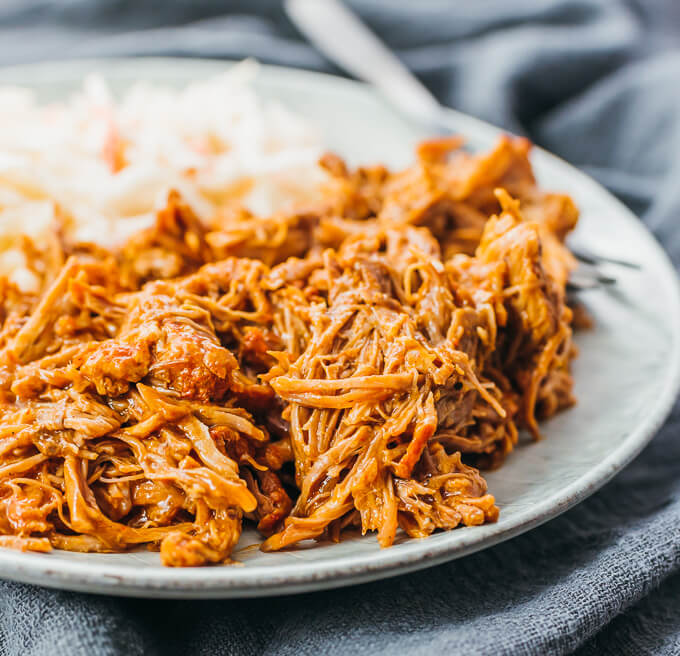 Making pulled pork in the pressure cooker is so fast. Before I got my Instant Pot, the slow cooker was my go-to method for making pulled meat of any kind, usually taking 3-4 hours on high power. With the pressure cooker, it takes 1 hour of cooking plus an additional 10 minutes for natural pressure release. Now I can actually get dinner on the table without starting in the early afternoon.

The pressure cooker makes shredded pork that’s incredibly tender. It was practically falling apart as I took it out of the pot, and was effortless to shred. It’s also so juicy and full of flavor that you could even enjoy it as-is.

I also like how this recipe is super simple. No browning or sauteing needed. Just toss the pork with dry seasonings and pressure cook until it’s tender. Shred with forks, and serve with your favorite bbq sauce (or make your own keto bbq sauce). 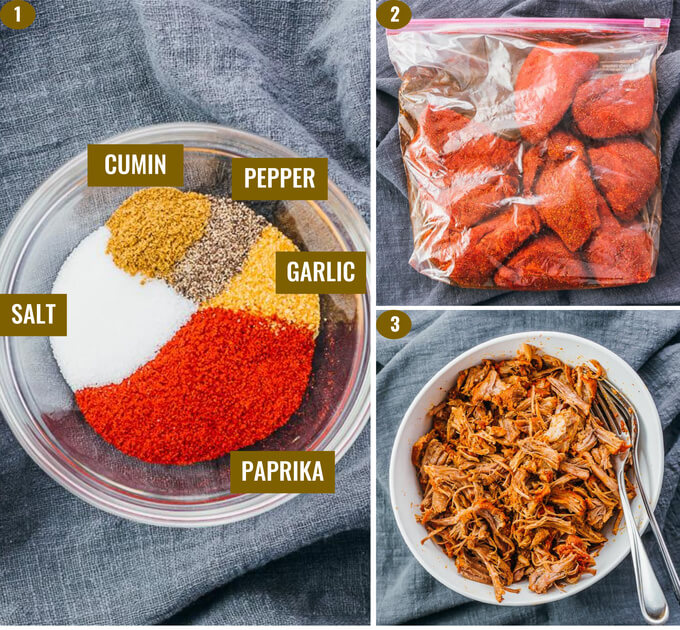 I love this dry rub of seasonings — it adds a lot of flavor and aromatics to the pork. I use a lot of paprika: 2 tablespoons, not teaspoons. You can follow my recipe and use this homemade seasoning mix, or you can use your favorite spices or even a storebought spice mix. Either way, it’ll come out fantastic.

The easiest way to rub the seasonings onto the pork is by tossing them together in a resealable bag. See the photo above where I chopped the pork into roughly eight pieces and tossed them in a ziploc bag. 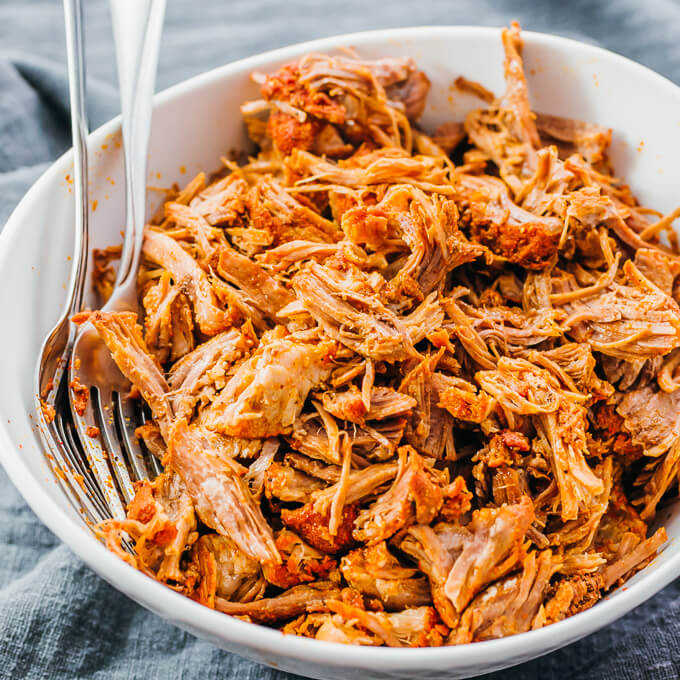 You can use either pork butt or pork shoulder for this recipe. Curious why? Well, they’re actually more-or-less the same cut of meat! Pork butt, also known as Boston butt, doesn’t come from anywhere near the pork’s rear end. It actually comes from the upper part of the shoulder, called the blade shoulder. Pork shoulder usually refers to the lower part of the shoulder. Note that this is how Americans refer to pork cuts — I have no idea what other people do.

The terminology goes back to colonial New England. Butchers would take less desirable pork cuts like hams and shoulders and pack them into a transport barrel known as a butt (FYI this is also a unit of measurement sometimes still used at wineries). Shoulder cuts became a Boston specialty and were known as the Boston butt.

The pig’s actual butt, referring to the muscle at the top of its leg, is where ham usually comes from.

So you can pick up anything labeled pork butt or pork shoulder for this recipe. Just make sure you get the boneless kind, anywhere in the 3 to 4 pound range. I usually pick a piece that looks leaner, since I trim off most of the visible fat. 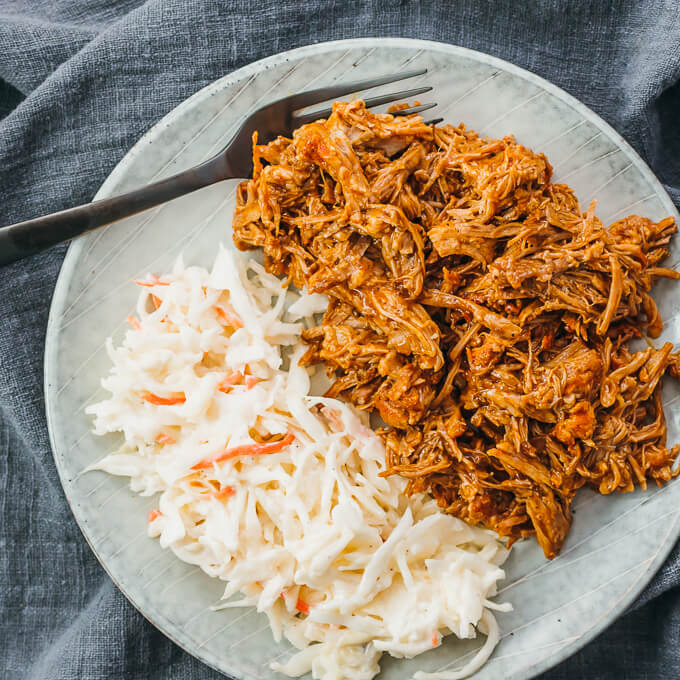 I recommend serving the shredded pork with your favorite barbecue sauce. Since I follow a low carb diet, I use my homemade keto bbq sauce, which is sugar free and low in carbs. If you’re not up to making your own, you can buy sugar free bbq sauces by brands like Walden Farms, G Hughes, and Guy’s.

I like serving pulled pork with coleslaw for a low carb dinner, but you can also make pulled pork sandwiches or use it as a filling for Mexican dishes. Lots of possibilities here. Check out these low carb appetizers and sides for more ideas.

Leftovers can be covered and refrigerated, and they reheat well using the microwave. Enjoy! 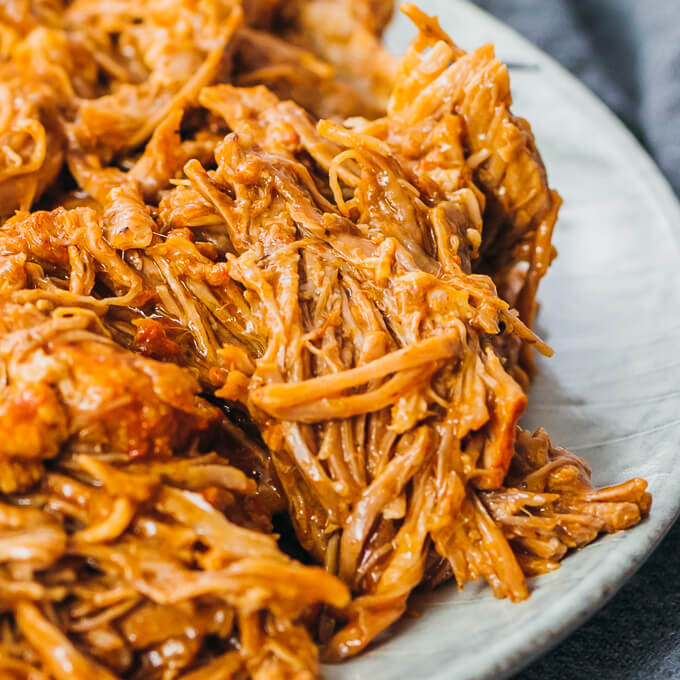 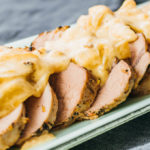 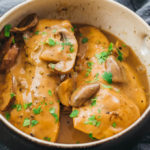 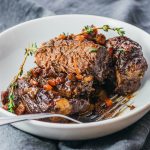 I’m looking forward to making this recipe tonight. I unknowingly purchased the bone-in pork. Will this recipe still work without adjustments?

Are you able to remove the bone from the pork? That would be the easiest and most reliable solution. Since you need to prepare the pork anyway by trimming the fat and cutting it into roughly 8 even pieces, it may not be that much extra work to remove the bone.

If you can’t remove the bone, you can try adding some time to the pressure cooking cycle. I haven’t tested bone-in pork so I can’t say for certain how long it should be, but I’m guessing that 10 minutes extra would work.

This is honestly the best pulled pork I have ever had and I consider myself a pulled pork connoisseur. The seasoning was spot on. I didn’t change a thing. The keto bbq sauce was really good too but the pork was too good for sauce. Amazing!!!

I made half with bbq sauce and left the other half plain and mixed with sauerkraut for next night. It was outstanding both ways!

Newsletter
Subscribe and get the latest low carb recipes by email?
Vote Up1Vote Down  Reply
Rebecca

I made this last night and oh. My. Goodness! If I could give it 10 stars, I would. The dry rub is DELICIOUS and with the addition of the BBQ sauce (which I added some liquid smoke to and it took it OVER THE TOP), it’s ridiculous amounts of amazing. I stood at the counter and ate it out of the bowl with a fork! SO GOOD! Thank you!!!

A really easy and GOOD recipe. Leftovers are even better! SO many uses with the pork too – tacos, sandwiches, salads, etc. – Just modify the sauce. The basic IP pulled pork recipe is a winner!

I made this for my husband and I and it was PHENOMENAL! I want to make it for extended family this weekend – if I use two 3-4 lb pieces of meat, do I just double everything else but leave the cooking time the same? Thanks so much!

Best recipe ever. I will be sharing it and making it again soon!! Almost didn’t even need bbq sauce!

This was so easy and tasty! Thank you! It tastes good without the bbq sauce!

Best pulled pork I’ve ever made! It didn’t even need sauce! I love that it wasn’t hard to pull; I was easily able to shred it with 2 forks. Definitely a new favorite in my house.

I’ve made this twice and love it both times. I make the barbecue sauce and put it in small 4oz mason jars in the freezer for other things like burgers. My problem is I can’t find your yummy coleslaw recipe. Am I missing something?

I’m glad to hear you enjoyed this recipe, Evelyn. I don’t currently have a coleslaw recipe on my site — sorry for any confusion about it. Sometimes I make homemade or use store-bought coleslaw to enjoy with this pulled pork dish.

Love, love, love this recipe along with the Keto BBQ sauce link!! Pork was SO tender. Just wondering if you might have a recipe to use the leftover stock, spices etc. to make into a soup? Seems a shame to pull out the meat and throw out the rest.

Glad you enjoyed it, Rose. I don’t have a recipe to re-purpose the leftover liquid into a soup, sorry! This is my only idea: if you simmer it on the saute mode until thickened, you might be able to create some kind of sauce out of it to pair with the pork.

Do you add the shredded pork back to the pot with the liquid? I plan on making this!!

If I use half the meat do I need to half the time also?

The pressure cooking time remains the same, assuming your pork pieces are the same size as the original recipe.

Can you use a bone in pork shoulder? I have one I’d like to try in my instant pot

Do you place the meat on the rack?

Hi Bernadine! I don’t use a rack or trivet.

I’d like to make this but am thinking to cook it in a glass baking dish inside the IP, not in the water, which I do with other meats. Any reason not to do this? More flavor, less flavor? Thank you for this, we love pulled pork sandwiches so much.

That sounds fine, Sherry, and I think it would work just as well.

I made the recipe and instead of the bbq sauce I used Trader Joe’s Pineapple Salsa. The spice rub (added 1 tsp onion powder) worked amazingly well with the salsa. Simply delicious!

We made this last night and it was delicious! I couldn’t have had better pulled pork in a restaurant. My husband told me to make sure and save this recipe, which I did. We used the exact seasonings and we found some sugar free bbq sauce at a specialty store, which was also good. Thank you for this recipe.

Newsletter
Subscribe and get the latest low carb recipes by email?
Vote Up0Vote Down  Reply
Terri

I just made this. I only changed the recipe by adding some liquid smoke. Was phenomenal!!! My son wondered why I didn’t own a restaurant because it was so so unbelievably good!!! Thanks for sharing!!!

Made it two nights ago the whole family loved it, I had to hide some for lunch!!!:)

I have 4 lb of pork loin roast instead of pork shoulder/butt. Can I use this for this recipe? Should I increase the cook time?

How long should I cook it if my pork shoulder is 2.59 lbs

That is not too far off from what the recipe states, so I would keep the cooking time the same.

Such a hit. I omitted the bbq sauce and offered it a as a side condiment, but no one thought it was needed.

Newsletter
Subscribe and get the latest low carb recipes by email?
Vote Up0Vote Down  Reply
Sherri

Just made this, so tender and juicy!!

Very good! Nice and moist and the spice is really good!

Do you have a good keto friendly coleslaw recipe? I would love to make this with coleslaw.