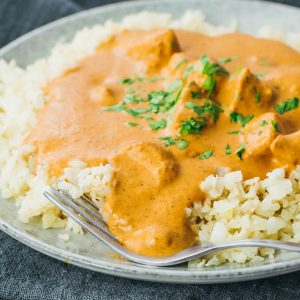 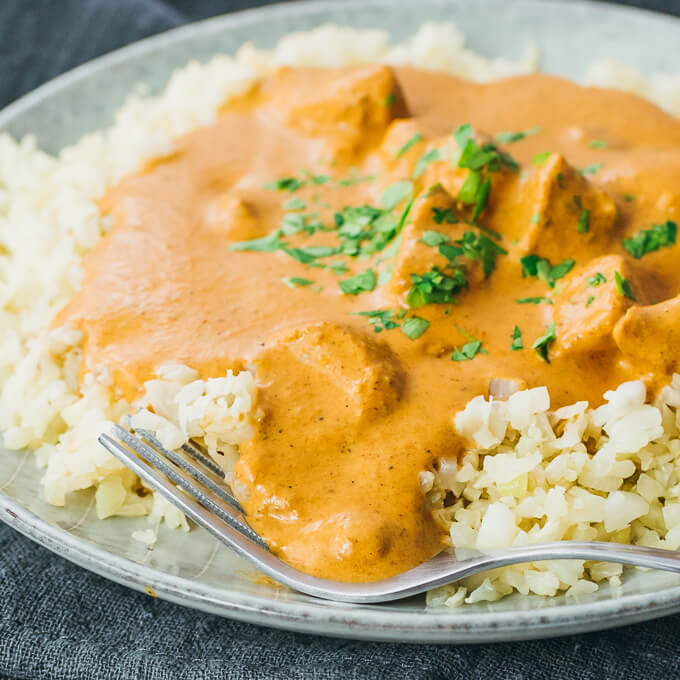 Chicken tikka masala is one of those dishes that’s universally loved by nearly everyone, whether you like Indian food or not, so it’s no wonder that the British consider it to be their national dish. I’ve had so many blog readers tell me different versions of the same story: they make this dish for their family members, who turn up their noses and claim they don’t like curries, only to take a bite and end up coming back for seconds and thirds.

I recommend that everyone try making this sometime — all you need to do is marinate the chicken in spices and yogurt, sear briefly on a fry pan, and put it in a slow cooker with the sauce ingredients for 2 hours on high. 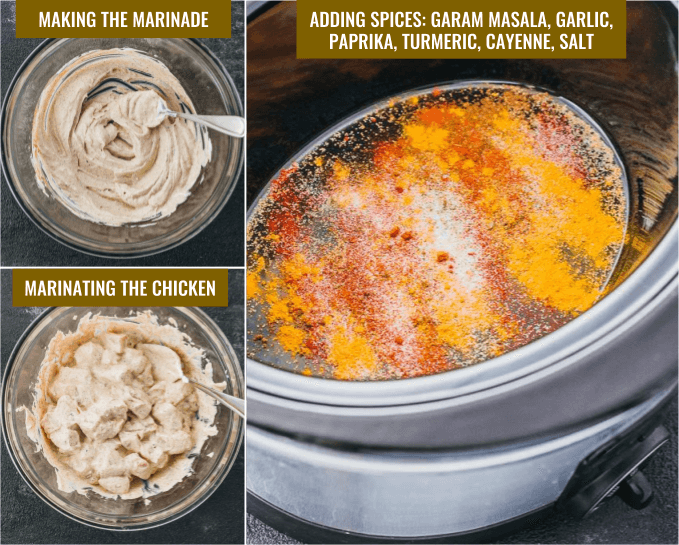 This slow cooker recipe is adapted from my stovetop and pressure cooker versions. Different cooking methods, but the final result is the same. You can find them at:

In all three versions, the chicken chunks are sauteed first. Don’t skip this step by just tossing everything directly into the slow cooker. If you do, the chicken will release its juices into the sauce as it cooks, which will alter the color, taste, and texture of the resulting sauce. I’ve tried skipping that stovetop step, and it’s nowhere near as good. 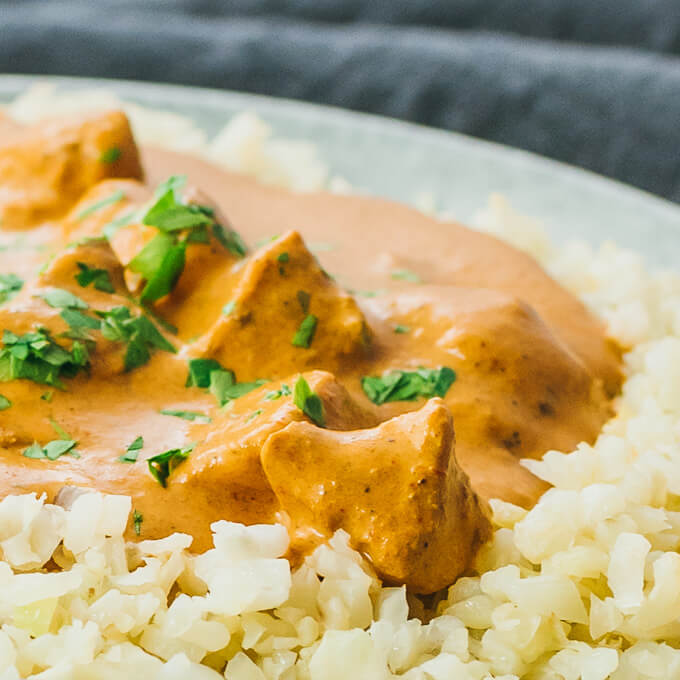 I’m often asked about ingredient substitutions, in particular the heavy whipping cream. I haven’t used anything other than heavy cream, but readers have told me that they have successfully substituted some or all of the heavy cream with coconut milk. I think the taste of coconut milk would go wonderfully with the flavors in chicken tikka masala, but I suspect it will result in a much thinner sauce. A better substitution might be coconut cream.

Garam masala is one of those spices that can’t be substituted because it gives a characteristic taste to Indian recipes like chicken tikka masala. It’s a blend of ground Indian spices including pepper, cloves, cinnamon, nutmeg, cardamom, and cumin. You can easily buy garam masala online, or you can buy it at some grocery stores. I’ve been able to consistently find it in U.S. supermarkets. 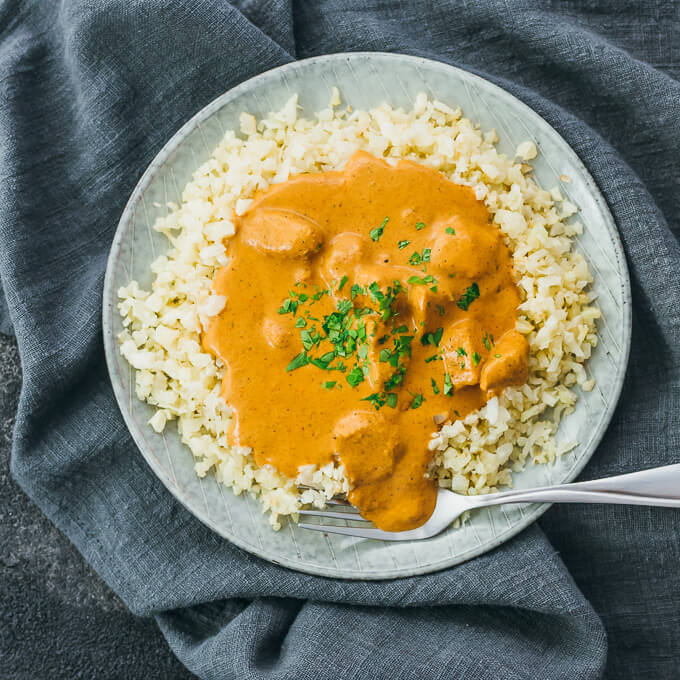 Chicken tikka masala is commonly served with side dishes like white rice or naan to help sop up the delicious sauce. This recipe makes a generous amount of sauce, so you’ll have plenty on hand.

Since adopting a keto lifestyle, I’ve been enjoying this meal with low carb side dishes like:

Cauliflower rice is an excellent substitute for white rice, acting as an efficient vehicle for transporting more of the savory sauce into my mouth. To prepare this, it’s easiest to buy bags of pre-riced cauliflower in the produce section of U.S. grocery stores — less work than grating cauliflower florets by hand. Sear the riced cauliflower on a pan with cooking oil until it’s tender. Plain and simple cauliflower rice is best — the tikka masala sauce will bring all of the flavor you need. 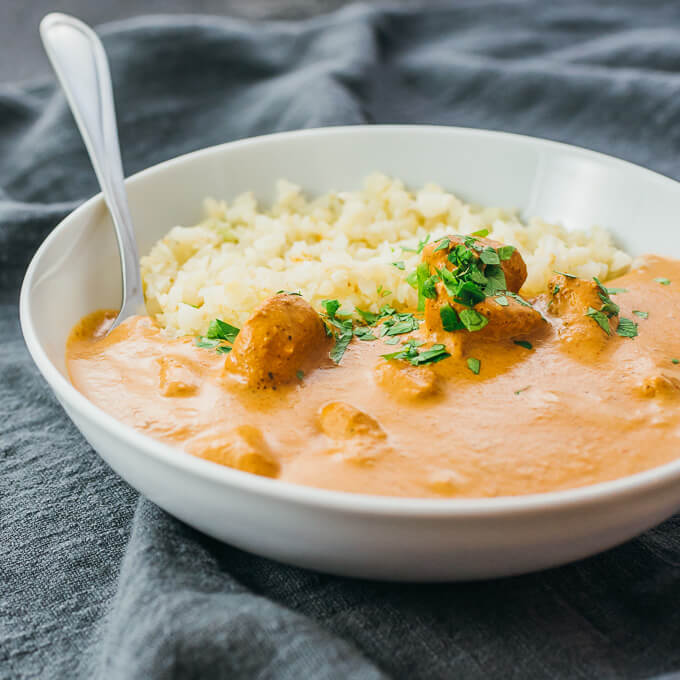 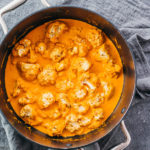 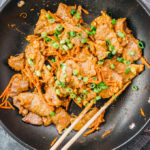 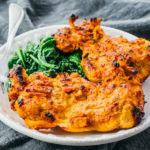 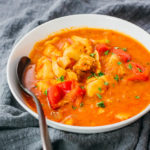 Thanks for the comments. By reading them I find everyone uses different subs. I have never had this dish before. I was getting hungry just reading. Now I am excited to just try it. Thanks again.

Could I cook on low in n the slow cooker and for how long?

Sooo. goooood! I followed cooking directions to a T and it is fabulous! I tripled the recipe to have this for dinner all week and am serving with a keto flat bread and cauliflower.

Newsletter
Subscribe and get the latest low carb recipes by email?
Vote Up0Vote Down  Reply
Dicentra A.

This is my absolute favorite recipe right now, delicious and very filling, a super plus that it’s low carb too! I make it every other week and serve it over cauliflower rice. Soooooo good! It’s hard to not overindulge.
I did have a question however, how many grams make one serving? I want to be able to track this correctly in my food diary. Thank you!

Hi Dicentra! I haven’t weighed each serving before, so I don’t know each serving’s weight in grams. You can calculate a decent estimate by adding up the heaviest ingredients (chicken, yogurt, tomato sauce, heavy whipping cream), converting that total from ounces to grams, and then dividing it by 4 servings.

Julia, instead of frying the chicken. Can I bake them in the oven?
Thank you.

Yes, that would work. Baking at high temp or broiling would be best for giving the chicken a charred appearance, but it’ll be delicious either way.

Can I make this with boneless thighs instead? I find boneless breasts can dry out after making and reheating plus I think they give much better flavor especially in Indian Food.

The breasts in this recipe don’t dry out, but I see no reason why you can’t replace with thighs instead. I suggest trimming off some of the excess fat on the thighs before using them in this recipe. Hope you give it a try!

Do you add the remaining marinade sauce to the crock pot ?

I don’t, as there’s usually not much marinade left over.

Perfection! I added a little bit more spice but the taste is great!

can you substitute something else with the yogurt for something with less carbs? would sour cream work?

I don’t think sour cream would work. I use Fage 2% greek yogurt and it has 6g net carbs per 7oz container, which only comes out to 1.5g per serving (4 servings in this recipe). https://usa.fage/products/yogurt/fage-total-2

Why 2% rather than full fat greek yogurt?

I use 2%, but higher fat percentages should also work well in this recipe.

OMG, I have a new favorite food! I had tried Trader Joe’s “butter chicken “ in the frozen food section and liked it, but THIS one is over the top!!!
Family, friends, and neighbors also loved it! Thanks so much for posting this recipe!
It’s a definite hit!

Ty for this recipe,I’m going to try it at a community center I help at. 20-25 servings for a dinner.

Lactose intolerant, could I use full fat coconut milk?

You can replace the heavy cream with full fat coconut milk, as you suggested. If there are any dairy-free yogurt brands available where you live, those would be a decent substitution for Greek yogurt. I don’t think the end result will be as rich as this dish is supposed to be, but hopefully it’ll still be delicious.

I loved this! I tweaked the recipe and added 3 tablespoons of unsalted butter to the crock pot about an hour into cooking. Gave it that extra richness I was looking for, and some extra fat for my keto WOE 🙂

Could I substitute yogurt for full fat sour cream??

No, I don’t recommend that.

You’re welcome, Taleene. I’m glad to hear that you found it easy to make 🙂

I made this the other night and it turned out perfectly! The chunks of chicken did not get tough after being sauteed, everything was moist and delicious! I was surprised it was so good, given how easy it was to put it together. My husband was particularly pleased with the quantities of sauce it made – he loves dunking his naan bread (and crusty bread) in the sauce. Thanks for posting this recipe!

Haha I love it when someone tells me they appreciate the extra sauce 🙂 I’m glad you found this easy to make, hope you get a chance to make it again soon!

Wondering if the white meat chicken gets tough between the sautee beforehand, then cooking so long in slow cooker. Is that been happening to anyone, and if so, would thighs be a better choice? Thanks

I have made this several times. Always perfect. I like to serve it with both naan and basmati rice. Trader Joe’s Mango Chutney is a nice accompaniment. Thanks so much for posting.

You’re very welcome! Thank you for taking the time to share your feedback 🙂

I love this recipe. Soooo good. My husband and I recently started counting calories, so I am wondering based on the nutrition facts you have posted….what amount is a serving size?

Thanks! I haven’t measured the volume of each serving, but it’s basically 1/4th of the entire recipe. So after making this, if you divide it into four equal portions, that should give you the serving size corresponding to the nutrition facts.

I can not WAIT to try this! I am a slow cooker lazy lady who likes to let the cooker do the work.

We make this recipe literally once a week… Either this slow cooker version or your instant pot version depending on how much lead time I give myself. We always have to double, or triple, the recipe because my husband loves it so much He wants leftovers. This is one of the only meals that he request they make enough for leftovers on… Thank you!

Hi Kadie! Your comment totally made my day! I’m so happy to hear that your husband loves it so much 🙂

I made this today and whilst it looks good it tastes way too sweet to be like a proper restaurant tikka masala, perhaps there is far too much tomatoe sauce / purée for my families licking. Was disappointed

I wonder if it’s the type of tomato sauce you used. I usually get a plain version — simply pureed tomatoes and salt, no sugar or herbs added. You can check the ingredients on the label of the can to see what’s in it.

So simple to make and absolutely delicious! Thank you for sharing your recipe!

Newsletter
Subscribe and get the latest low carb recipes by email?
Vote Up0Vote Down  Reply
Megan

Hi! Are you supposed to cook the chicken all the way through?

Hi Megan! No, just cook for about 5 minutes or until the outsides are mostly cooked. The purpose of that is to release some of their liquid so that it doesn’t happen in the slow cooker, which will affect the resulting sauce.

Is there any way to marinate and sauté the chicken the night before and then add the sauce the next day before cooking?

Yes, you can definitely marinate the chicken overnight. I haven’t sauteed the chicken the night before, but I don’t see why not.