Summary:
Tender strips of chicken coated in a rich and creamy sauce with sun-dried tomatoes and spinach, served over a bed of zucchini noodles. Add this tasty meal to your dinner rotation along with other Instant Pot recipes. 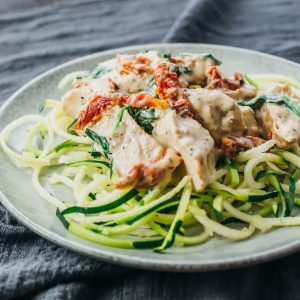 For seasoning the chicken: 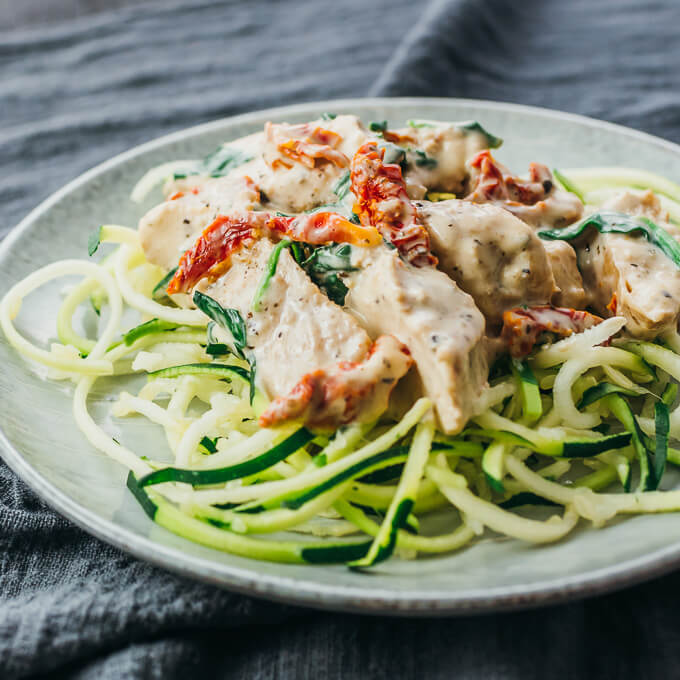 This Instant Pot creamy chicken is a fabulous low carb dinner that takes less than 15 minutes of cooking time in an electric pressure cooker. Imagine juicy and tender bites of chicken, seasoned with Italian herbs and garlic, soaked in a thick and flavorful white sauce made with heavy cream, parmesan cheese, and cream cheese. It’s like a keto dieter’s dream come true. The spinach adds some texture to every bite, and the sun-dried tomatoes provide occasional bursts of tartness. You can serve this creamy chicken over anything you want, and I usually prefer spiralized vegetables like zucchini or radish spaghetti-style “noodles.” 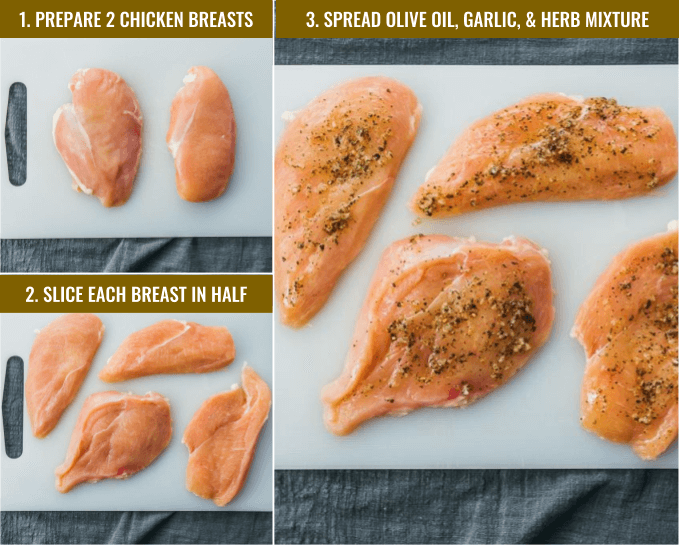 I developed this Instant Pot recipe by adapting one of my older recipes, a creamy sun-dried tomato chicken skillet. The ingredients are very similar, and it’s one of Mr. Savory Tooth’s favorite recipes, so it only took a few tries to perfect. I actually prefer this Instant Pot version more, because its sauce is richer with a stronger flavor.

This recipe was designed for a 6 quart pressure cooker. If you use a larger size such as 8 quarts, I recommend doubling the ingredients but keeping the pressure cooking time the same. As it is, the recipe doesn’t make a large amount and is intended to only feed two people with no leftovers. 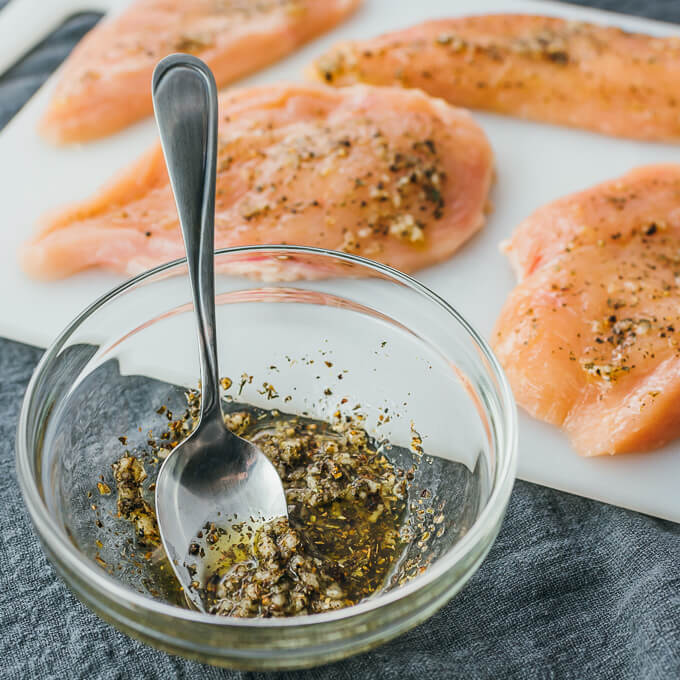 A few notes about the ingredients: 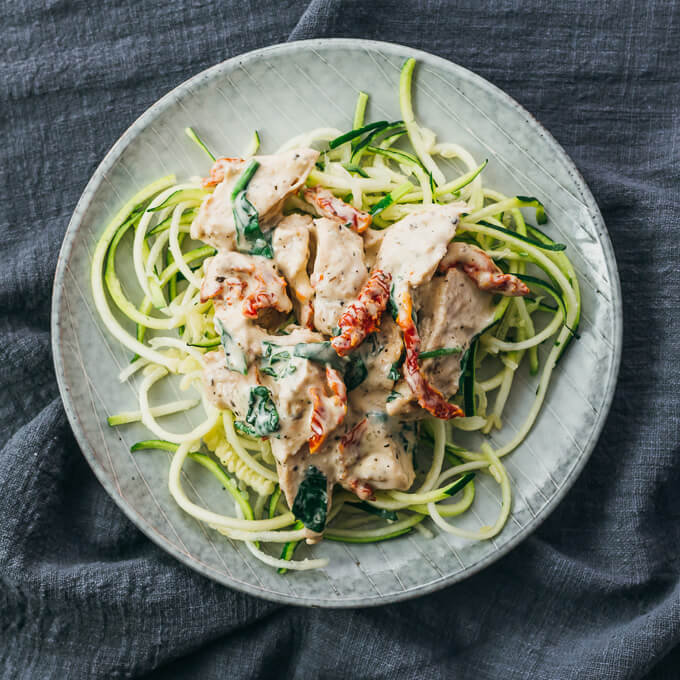 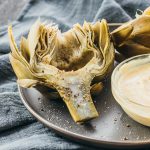 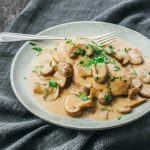 This was such a great recipe! This was the first recipe I tried in my instant pot and it was a huge success! It goes great over zoodles, as recommended. I doubled the recipe and it worked out very well, even with the 10 cloves of garlic. Thank you!

Very tasty recipe, we really enjoyed it. I did saute the zucchini noodles and they were a lot like pasta. We will make this again. Thanks for the recipe!

This is one of my favorite “go to” recipes! My family fell in love with this and asks for it all the time. The only change I made was to double the sauce recipe so if we have garlic bread there is extra to soak up. Excellent! Highly recommend!!!!!

Very good.Husband even liked it.

Newsletter
Subscribe and get the latest low carb recipes by email?
Vote Up0Vote Down  Reply
Trish

Hi Julia,
This recipe looks delicious! I would love to make it for a pot luck. What is your best advice for serving 10 to 12? Can it be multiplied that much?

Thank you Annette! Serving 10 people means multiplying the recipe by 5, which can work if your pressure cooker is large enough. It might be too tight of a fit for a 6 quart, but an 8 quart one might be doable. Avoid filling it up past the MAX line. If you have 2 pressure cookers, that would work as well. The other thing is sauteing the chicken. Since you can’t fit them all at once in a single layer in the pot, it would take a really long time to individually brown them all. You might want to use separate skillets to help you with this, to save time. Also, even though you will be multiplying the recipe’s ingredients by 5, the pressure cooking time should remain the same if each chicken breast is about 8 ounces. If your chicken breasts are larger, you may need to increase the cooking time by another minute or two.

This looks very tasty… If I wanted to double the recipe to save enough for lunches for the week, would the ingredients be exactly doubled, or adjusted differently? Thanks!

Yes, double the ingredients but keep the cooking times the same.

I did lighten this up a tad with only one change and that was to use unsweetened, plain almond milk in place of the heavy cream. The cream cheese and the parmesan cheese did a great job of thickening the sauce on their own and I didn’t miss the heavy cream. Very delicious meal and a real keeper! Thanks for posting it!

Thanks for sharing! Are the zucchini noodles raw or do they get soaked or cooked?

The zucchini noodles are raw.

This looks really good! I’m excited to try it!

This was my first Instant Pot meal. The flavor was very good! But I doubled the sauce and served it over pasta. I also used 3 cloves garlic (instead of 5) and used 1.5 tsp Italian seasoning(dried herbs) instead of the 1 tsp. Will make again, but will make over the stove, as I’m not a fan of the Instant Pot yet.

Thanks for your feedback! I do have a stovetop version of this recipe that you might like better.