Summary:
Pan searing shrimp is one of my favorite ways to cook shrimp, and this tasty seafood dinner includes a rich sauce with diced tomatoes, crumbled feta cheese, and minced garlic. 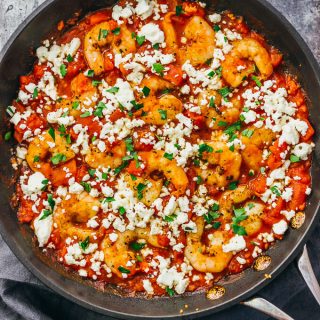 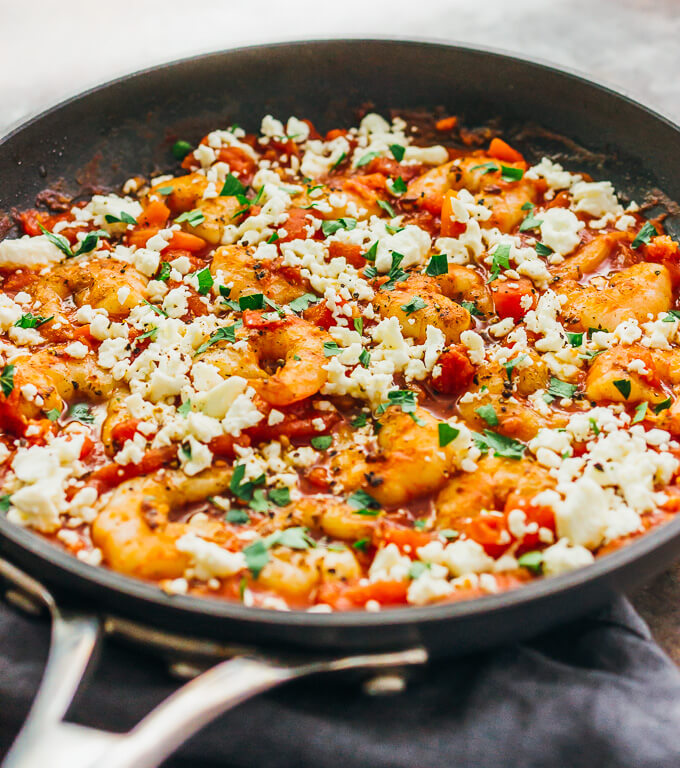 Who says seafood and cheese don’t mix? This pan seared shrimp skillet has a generous helping of crumbly feta cheese, and is mixed with a bold garlic tomato sauce with just a slight hint of spiciness. It’s a terrific medley of flavors that I could easily eat several servings of, and it’s great as a standalone dinner, a side dish, or an appetizer.

It’s also incredibly easy to make: just one pan and 30 minutes total including prep and cooking times. I first made these pan seared shrimp several weeks ago as a fallback dinner on a crazy day where I had little time, and I was pleasantly surprised at the ease of this recipe and the excellent balance of flavors. I can see it working well with other kinds of seafood, if shrimp isn’t exactly your thing. 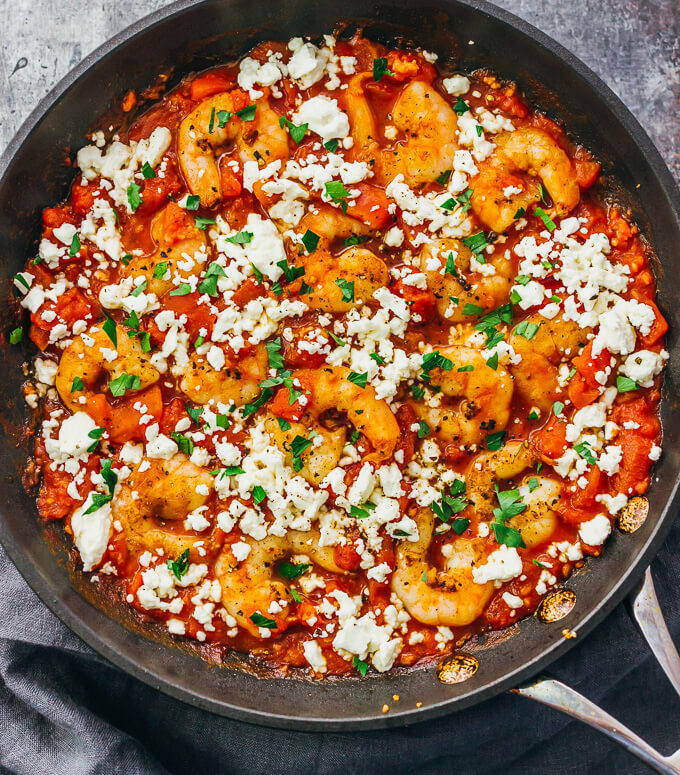 I recommend cooking the shrimp at medium-high heat to get a nice sear on them. If you’re hesitant about pan frying anything hotter than medium heat due to the inevitable oil splatters all over your cooktop, read on for my tips on how to avoid them.

First of all, oil doesn’t splatter. Water does. You get oil splatters because there’s water in your pan, which instantly turns into steam because it’s beyond its boiling point. When water turns into steam, it takes oil droplets along with it. That means in order to reduce oil splatter, you need to make sure your pan and your food (in this case, the shrimp) are dry. I usually use a kitchen towel to pat my shrimp dry. If your shrimp are frozen, it’s even more important that you pat them dry after they thaw.

Another way to reduce greasy splatter is to coat the food with oil and not the pan. That’s what I do in this recipe, using butter instead of oil: the shrimp are tossed with melted butter before being added to a dry heated pan. To melt the butter, zap it in a small prep bowl in the microwave until it’s just starting to melt. Stir with a spoon until completely melted. Then toss the melted butter with the patted-dry shrimp until well-coated.

I also recommend getting a splatter guard. They’re made of fine metal mesh and can catch some, but not all, oil droplets. They fit your pan like a lid, which means you’ll still have to lift it up (and risk splatters) to reach anything in the pan. I use my splatter guard whenever I’m frying bacon.

Recently I heard of Frywall, which helps prevent oil splatters but doesn’t cover access to the pan. Sounds like a great concept but I haven’t tried it. Lastly, you could try using a griddle pan, which helps reduce splatter because water and juice can get trapped in its grooves. 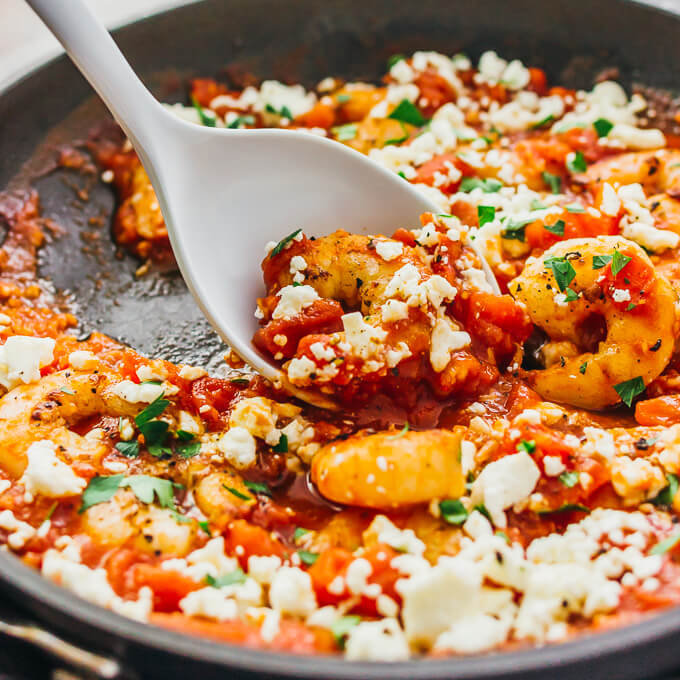 This recipe moves fast so be sure to have all ingredients prepped and ready before heating the pan. Here’s the timeline: the shrimp cooks in less than 2 minutes, the garlic browns almost instantly, and the tomato mixture only takes 5 minutes.

I love super fast recipes like this — it reminds me of these 5-minute homemade spiced almonds — but it means that you have to be organized and have everything in the ingredient list ready to go.

I’m hesitant to talk about substitutions because I love every single thing in the ingredients list. As I mentioned earlier, if you don’t eat shrimp you can substitute other types of seafood, like fish. If you don’t like spicy foods, you can omit the 1/8 teaspoon cayenne, but it’s not much to begin with. You’ve probably noticed that there’s a lot of garlic in this recipe — yes, 10 cloves or a whole bulb — that’s not a typo. You can use less if it’s too much for you, but it definitely doesn’t overpower the dish. 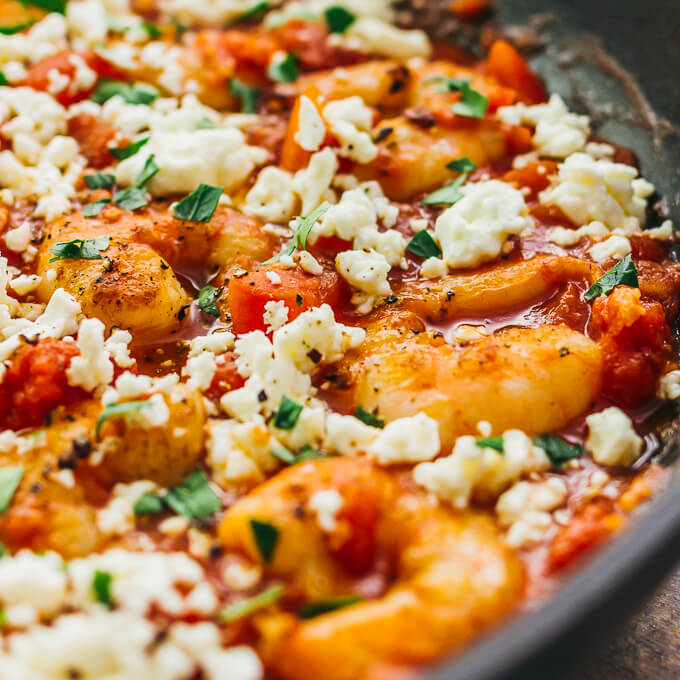 Think this would work if subbed with chicken instead of shrimp?

Hi Melinda, yes I think it would work. I much prefer it with shrimp or some type of seafood, but if you prefer chicken, give it a try and let me know how it goes 🙂

Mmmmm just made this! But I used fresh cherry tomatoes and added a drizzle of olive oil with the butter. Absolutely bursting with flavours! And it looks so pretty too (almost too pretty to eat!)

Yes, I think that would be fine.

What was in the bottom of the plate you served this on top of ? Looked like some typ of noodle.

Where do all the carbs come from? Looks delish but that’s a lot of carbs if you’re on a keto diet.

It comes from the tomatoes, feta cheese, and garlic. The net carbs per serving is definitely on the high end — you could use fewer tomatoes, or eat a smaller serving to make it work for you.

I made this for dinner tonight. Yum!! This would be great over spaghetti!

Love the spaghetti idea!! I’m glad you liked this dish 🙂