Summary:
Check out this easy slow cooker version of my popular beef and broccoli recipe.
Looking for low carb recipes instead? Visit the Savory Tooth Homepage. 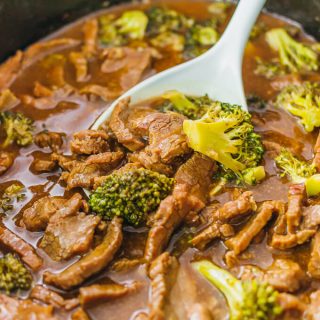 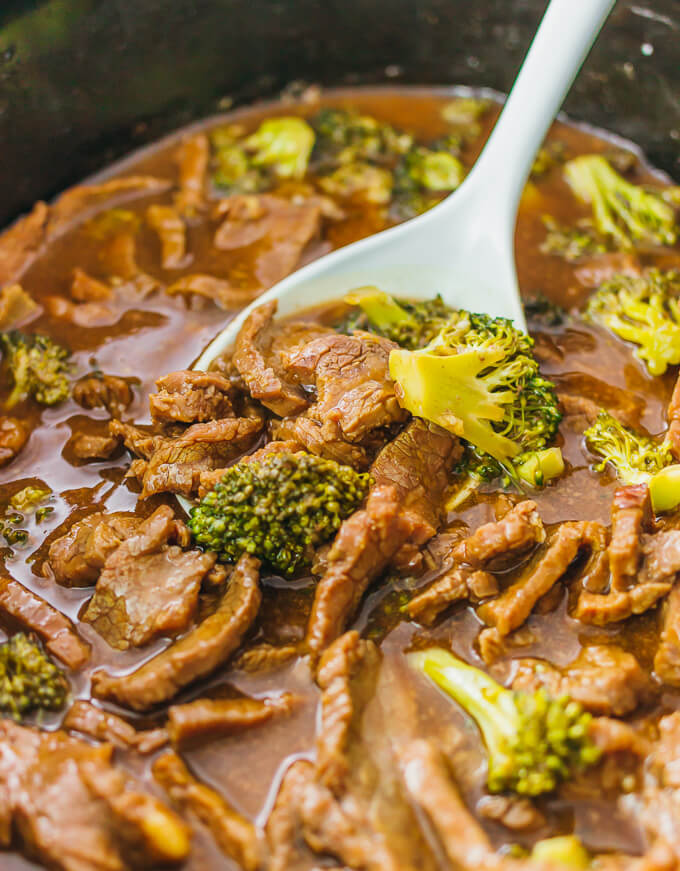 This slow cooker version of beef and broccoli is based on my popular stovetop version and a similar low carb version. They’re similar in terms of the ingredients and the sauce, so you’ll be getting that same great taste and flavor. Also similar is how this slow cooker version is a one-pot recipe — everything, including the broccoli, is cooked together in the slow cooker. You won’t need to steam or cook the broccoli separately.

You can decide which cooking method is ideal for you based on how much time and effort you’re willing to spend. The stovetop/pan method is for people who are short on time, but are willing to take the effort to cook the dish. On the other hand, the slow cooker method is for people who are looking for a “hands-off” approach and who are able to start their slow cooker hours in advance to give it time to cook. 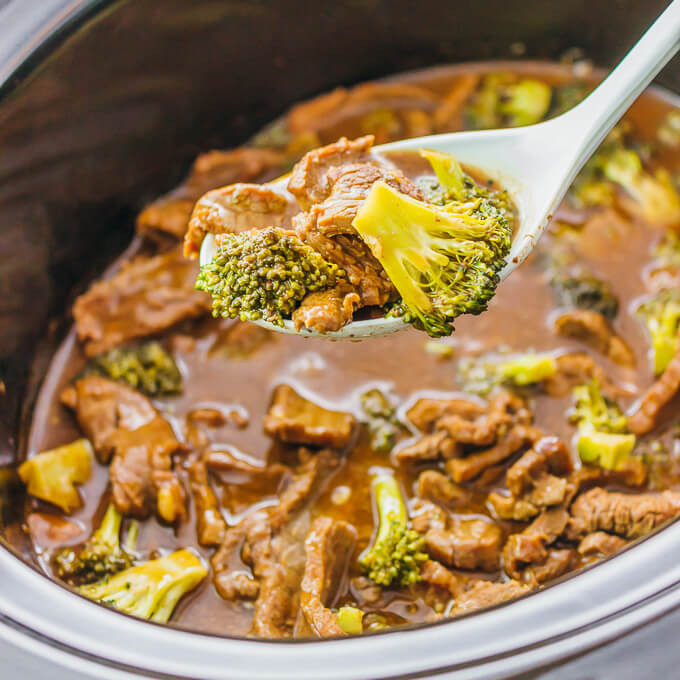 I get a lot of reader questions about this dish, so let me answer the most common ones:

Asian appetizers that would go great with this dinner include: avocado egg rolls or vegetable egg rolls, scallion pancakes, soup dumplings, or a peanut noodle salad. 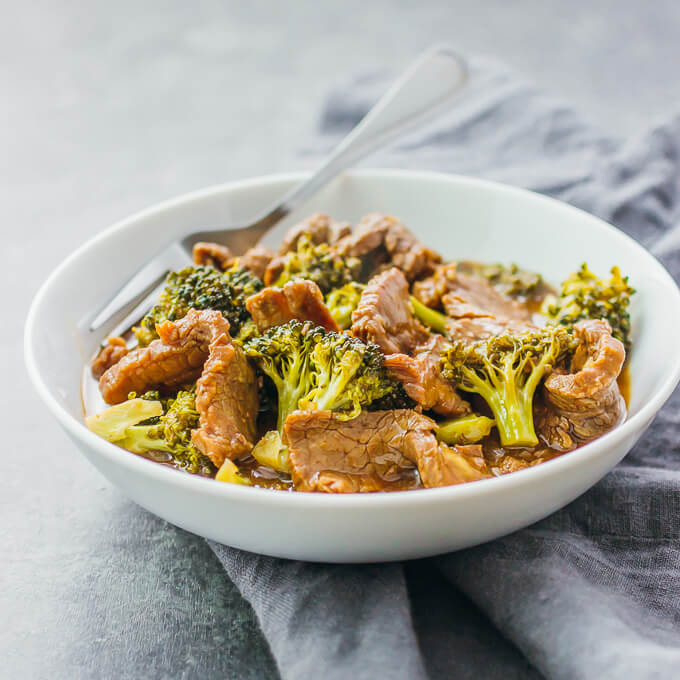 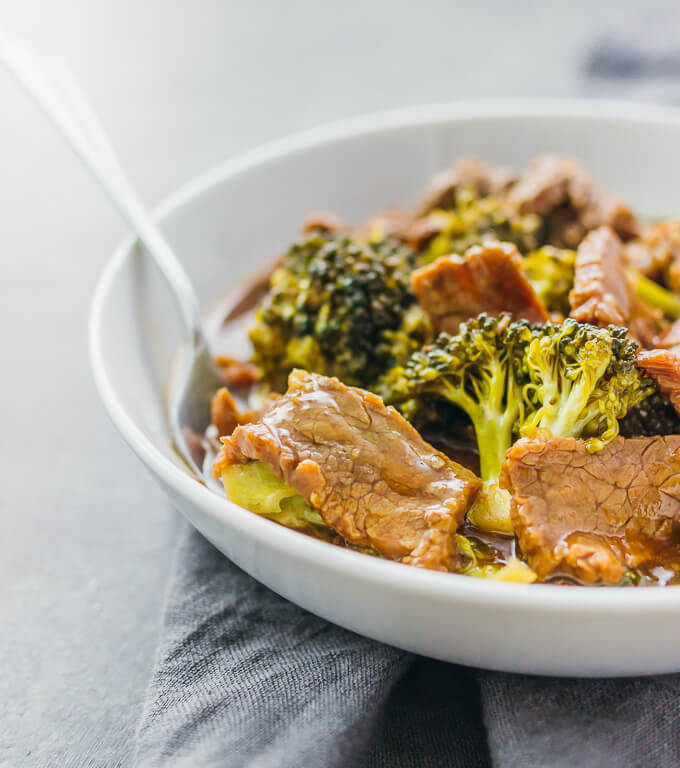 Have you ever done this recipe ahead of time and froze it?

Hi Brooke! I think that would be fine, but I haven’t tried it. Let me know if you do!

Hello Julie, There never seems to be enough sauce to put over the rice. If I double the sauce should it be cooked longer? Do you think it would make a difference at all?

I don’t think the cooking time would be affected if you doubled the sauce. If you give that a try, please let me know how it turns out for you!

Hi Julia, I’ve never cooked with flank steak before, does it turn out very tender? Thank you!! it looks delicious

I do think it comes out quite tender. Make sure to slice the beef thinly against the grain — that helps with tenderness!

I would strongly recommend the low sodium soy sauce. Also will make this dish again but may increase the amount of brown sugar a little.

And can I use coconut aminos instead of soy sauce? Also…instead of corn starch can I use xanthan gum?

Can i use beef bone broth instead?

I haven’t using that with this recipe, but should be OK.

Can you substitute the beef stock for beef broth?

Was the flank steak cooked before being added to the crock pot?

The flank steak is not cooked.

Hello I didn’t have any brown sugar but I used raw sugar that is granulated. I hope it comes out tasting the same.

It shouldn’t make a huge difference. Hope you enjoyed it 🙂

If I wanted to double the recipe would I need to double me the time cooked or cook for the same amount of time? I’ve made this a few times and love it but we never have enough leftover and we love leftovers!!! 🙂

Hi Rose! If you double the recipe, you should keep the cooking time the same. Let me know if you have other questions!

How do you make the sauce without the meat?

what are the measurements for six servings?

For 6 servings, you should double the ingredients.

How big is your crockpot for this?

I use a 6 quart slow cooker.

Exactly how much is a serving?

Each serving is one-third of the recipe, which is about 1 small bowl of beef and broccoli. You can eat as-is, or serve with a side of vegetables or rice to accompany it, which is what I typically do.

Julia, will it be more tender if I cook it on low?

Hi Denise, I haven’t tried cooking it on low before, so I’m not sure if it will be more tender. If you give it a try, let me know!

How long do you think it should cook if the crockpot were set to Low?

Hi Kimm, you can double the time if you are setting it to low.

Would this work if I cooked on low for 4 hours? Making it for dinner tonight!!

Hi Katie! Yes, that should be fine.

Your video shows sesame oil but that is not listed in your ingredients. How much sesame oil do you use?

I mention in the text above the video that I omitted sesame oil because it doesn’t make any noticeable difference in the taste. I used about 1-2 tablespoons of sesame oil in the video.

Is the calorie count per serving??

I’m trying to make this for 15 teenagers. Recommendations? Would I REALLY need 10 lbs. of steak??

The recipe calls for 1.5 pounds of flank steak and it makes 3 servings. So if you need to make 15 servings, then you only need 7.5 pounds of steak.

Making this right now… I’ll let you know how yummy it is !!
My husband & daughter can’t wait for dinner… lol

Haha hope you guys love it!!

This is the second time for me making this.
My family loves it!

Woohoo glad you love it so much!! 🙂

Ow. I added the garlic in the beginning. Will that hurt?

Could I cook longer in the crock pot? Maybe 6-8 hours to make the meat more tender.

You can cook the beef longer if you’d like, but 6–8 hours sounds way too long to me. You don’t want the beef to be falling apart and shredded.

it was so simple and so good thanks for sharing